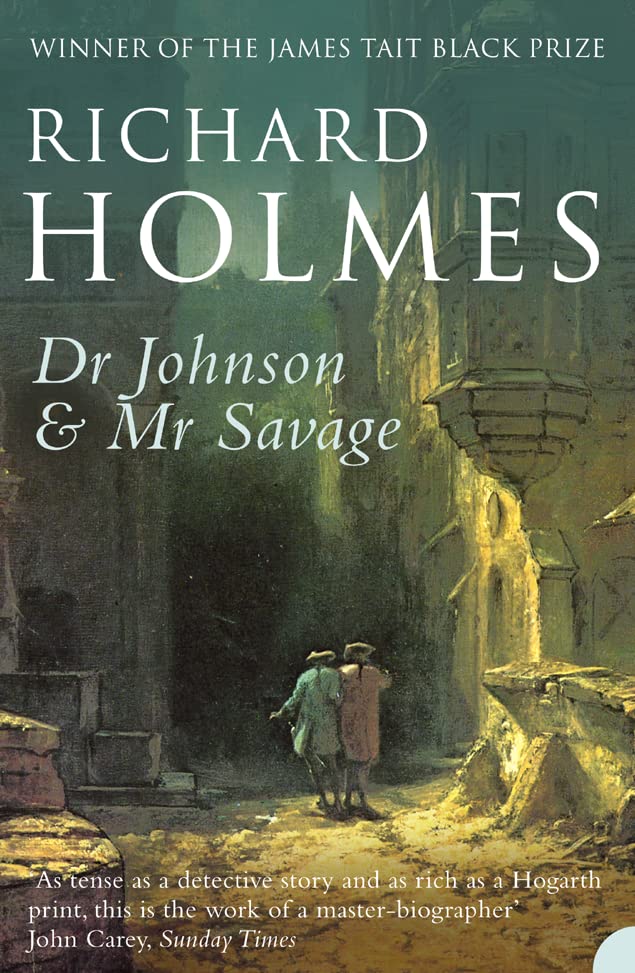 A classic reissue of Richard Holmes's brilliant book on Samuel Johnson's friendship with the poet Richard Savage, which won the James Tait Black Prize for Biography.

A classic reissue of Richard Holmes's brilliant book on Samuel Johnson's friendship with the poet Richard Savage, which won the James Tait Black Prize for Biography.

Dr Johnson & Mr Savage is the story of a mysterious eighteenth-century friendship. Richard Savage was a poet, playwright and convicted murderer who roamed through the brothels and society salons of Augustan England creating a legend of poetic injustice. Strangest of all his achievements was the friendship he inspired in Samuel Johnson, then a young, unknown schoolmaster just arrived in London to seek his literary fortune. This puzzling intimacy helped to form Johnson's experience of the world and human passions, and led to his masterpiece The Life of Richard Savage, which revolutionized the art of biography and virtually invented the idea of the poet as a romantic, outcast figure.

Richard Holmes gradually reconstructs this alliance, throwing suprising new light on the character of Dr Johnson. This extraordinary book also questions the very nature of life-writing and exposes the conflicts between friendship, truth and advocacy which the modern form has inherited.

`As tense as a detective story and as rich as a Hogarth print, this is the work of a master-biographer.' John Carey, Sunday Times

`Richard Holmes's Dr Johnson & Mr Savage is enthralling, well-written and convincing, a model of tactful psychological biography. One reads it with the pleasure one derives from great imaginative literature.' Theodore Dalrymple, Spectator

`Samuel Johnson's Life of Mr Richard Savage is now perfectly complemented by Holmes's volume which acts as a Baedeker through the reeking purlieus of an 18th-century Grub Street, while at the same time bringing fully to life two of the most complex and fascinating characters of English letters.' Peter Ackroyd

`Holmes, one of the most subtle and imaginative of contemporary biographers, is a virtuoso sleuth, an inspired rooter out of the human being netted in the web of words spun by a poem or a memoir. He combines scholarship with a rare gift of empathy, a deep personal involvement with his subject...His writing seems to glow from the fusion of an acute critical intelligence with a deep poetic and imaginative insight.' Patrick Taylor Martin, Literary Review

Richard Holmes is Professor of Biographical Studies at the University of East Anglia, and editor of the Harper Perennial series Classic Biographies launched in 2004. His is a Fellow of the British Academy, has honorary doctorates from UEA and the Tavistock Institute, and was awarded an OBE in 1992.

His first book, Shelley: The Pursuit, won the Somerset Maugham Prize in 1974. Coleridge: Early Visions won the 1989 Whitbread Book of the Year, and Dr Johnson & Mr Savage won the James Tait Black Prize. Coleridge: Darker Reflections, won the Duff Cooper Prize and the Heinemann Award. He has published two studies of European biography, Footsteps: Adventures of a Romantic Biographer in 1985, and Sidetracks: Explorations of a Romantic Biographer in 2000.

GOR003512044
9780007204557
0007204558
Dr Johnson and Mr Savage by Richard Holmes
Richard Holmes
Used - Very Good
Paperback
HarperCollins Publishers
2005-08-15
272
N/A
Book picture is for illustrative purposes only, actual binding, cover or edition may vary.
This is a used book - there is no escaping the fact it has been read by someone else and it will show signs of wear and previous use. Overall we expect it to be in very good condition, but if you are not entirely satisfied please get in touch with us
Trustpilot