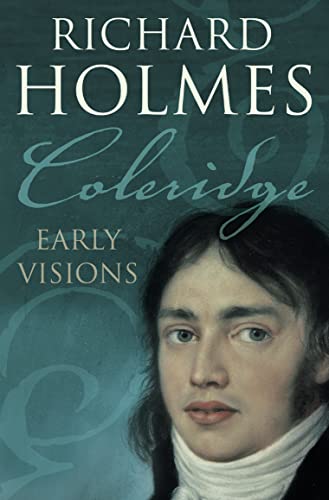 Winner of the 1989 Whitbread Prize for Book of the Year, this is the first volume of Holmes's seminal two-part examination of Samuel Taylor Coleridge, one of Britain's greatest poets.

Winner of the 1989 Whitbread Prize for Book of the Year, this is the first volume of Holmes's seminal two-part examination of Samuel Taylor Coleridge, one of Britain's greatest poets.

'Coleridge: Early Visions' is the first part of Holmes's classic biography of Coleridge that forever transformed our view of the poet of 'Kubla Khan' and his place in the Romantic Movement. Dismissed by much recent scholarship as an opium addict, plagiarist, political apostate and mystic charlatan, Richard Holmes's Coleridge leaps out of the page as a brilliant, animated and endlessly provoking figure who invades the imagination.

This is an act of biographical recreation which brings back to life Coleridge's poetry and encyclopaedic thought, his creative energy and physical presence. He is vivid and unexpected. Holmes draws the reader into the labyrinthine complications of his subject's personality and literary power, and faces us with profound questions about the nature of creativity, the relations between sexuality and friendship, and the shifting grounds of political and religious belief.

'Dazzling...Holmes has not merely reinterpreted Coleridge; he has recreated him, and his biography has the aura of fiction, the shimmer of an authentic portrait...a biography like few I have ever read.' James Wood, Guardian

'A deeply moving life of a troubled genius. From a great mountain of research, Holmes has fashioned a compelling narrative which inspires considerable affection and respect for Coleridge. This stimulating book is one of the most enjoyable biographies I have read.' Michael Shelden, Daily Telegraph

'Coleridge lives, and talks and loves...in these pages as never before.' Michael Foot, Independent

Richard Holmes is Professor of Biographical Studies at the University of East Anglia, and editor of the Harper Perennial series Classic Biographies launched in 2004. His is a Fellow of the British Academy, has honorary doctorates from UEA and the Tavistock Institute, and was awarded an OBE in 1992.
His first book, 'Shelley: The Pursuit', won the Somerset Maugham Prize in 1974. 'Coleridge: Early Visions' won the 1989 Whitbread Book of the Year, and 'Dr Johnson & Mr Savage' won the James Tait Black Prize. 'Coleridge: Darker Reflections', won the Duff Cooper Prize and the Heinemann Award. He has published two studies of European biography, 'Footsteps: Adventures of a Romantic Biographer' in 1985, and 'Sidetracks: Explorations of a Romantic Biographer' in 2000. His most recent book 'The Romantic Poets and their Circle' was published by the National Portrait Gallery in 2005. He lives in London and Norwich with the novelist Rose Tremain.

GOR008286719
9780007204571
0007204574
Coleridge: Early Visions by Richard Holmes
Richard Holmes
Used - Like New
Paperback
HarperCollins Publishers
2005-12-05
432
N/A
Book picture is for illustrative purposes only, actual binding, cover or edition may vary.
The book has been read, but looks new. The book cover has no visible wear, and the dust jacket is included if applicable. No missing or damaged pages, no tears, possible very minimal creasing, no underlining or highlighting of text, and no writing in the margins
Trustpilot