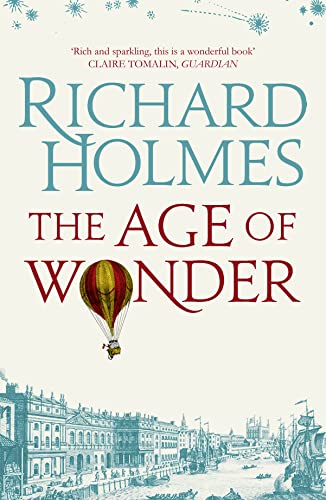 The Age of Wonder by Richard Holmes

Winner of the Royal Society Prize for Science Books.

Shortlisted for the Samuel Johnson Prize.

The Age of Wonder: How the Romantic Generation Discovered the Beauty and Terror of Science by Richard Holmes

Winner of the Royal Society Prize for Science Books.

Shortlisted for the Samuel Johnson Prize.

'The Age of Wonder' is Richard Holmes's first major work of biography in over a decade. It has been inspired by the scientific ferment that swept through Britain at the end of the eighteenth century, which Holmes now radically redefines as 'the revolution of Romantic Science'.

The book opens with Joseph Banks stepping onto a Tahitian beach in 1796, hoping to discover Paradise. The young botanist had set sail in search of new worlds - inspired by the Romantic revolution of science that was sweeping through Britain. Banks goes on to introduce us to William Herschel, whose groundbreaking dedication to the stars forever changed the public conception of the solar system, and Humphry Davy, whose creation of the Safety Lamp went on to save thousands of lives.

These are just a few of the lives covered in this remarkable work in which Holmes charts the many voyages of discovery - astronomical, chemical, poetical, philosophical - that made up this 'age of wonder'. From telescopic sight to miner's lamp, and from the first balloon flight to African exploration, it tells the stories of great innovations, and the inspired individuals behind them.

'Exuberant... Holmes suffuses his book with the joy, hope and wonder of the revolutionary era. Reading it is like a holiday in a sunny landscape, full of fascinating bypaths that lead to unexpected vistas... it succeeds inspiringly'' John Carey, Sunday Times

'I am a Richard Holmes addict. He is an incomparable biographer, but in The Age of Wonder, he rises to new heights and becomes the biographer not of a single figure, but of an entire unique period, when artist and scientist could share common aims and ambitions and a common language ... Only Holmes, who is so deeply versed in the people and culture of eighteenth-century science, could tell their story with such verve and resonance for our own time.' Oliver Sacks

'"The Age of Wonder" gives us... a new model for scientific exploration and poetic expression in the Romantic period. Informative and invigorating, generous and beguiling, it is, indeed, wonderful' Jenny Uglow, Guardian

'This is a book to linger over, to savour the tantalising details of the minor figures... "The Age of Wonder" allows readers to recapture the combined thrill of emerging scientific order and imaginative creativity' Lisa Jardine, Financial Times

Richard Holmes is Professor of Biographical Studies at the University of East Anglia, and editor of the Harper Perennial series Classic Biographies launched in 2004. He is a Fellow of the British Academy, has honorary doctorates from UEA and the Tavistock Institute, and was awarded an OBE in 1992.

His books have won the Somerset Maugham Prize, the Whitbread Book of the Year, the James Tait Black Prize, the Duff Cooper Prize and the Heinemann Award. His most recent book, The Age of Wonder, won the Royal Society Prize for Science Books and was shortlisted for the Samuel Johnson Prize.

GOR004312490
9780007441358
0007441355
The Age of Wonder: How the Romantic Generation Discovered the Beauty and Terror of Science by Richard Holmes
Richard Holmes
Used - Very Good
Paperback
HarperCollins Publishers
2011-10-27
380
N/A
Book picture is for illustrative purposes only, actual binding, cover or edition may vary.
This is a used book - there is no escaping the fact it has been read by someone else and it will show signs of wear and previous use. Overall we expect it to be in very good condition, but if you are not entirely satisfied please get in touch with us
Trustpilot