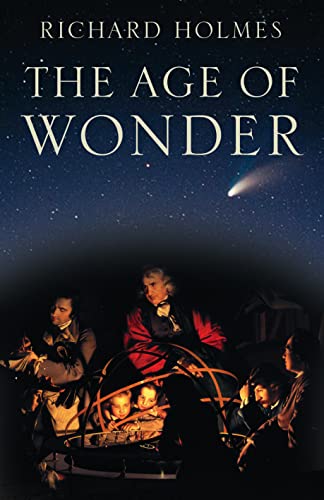 The Age of Wonder by Richard Holmes

The Age of Wonder: How the Romantic Generation Discovered the Beauty and Terror of Science by Richard Holmes

'The Age of Wonder' is Richard Holmes's first major work of biography in over a decade. It has been inspired by the scientific ferment that swept through Britain at the end of the eighteenth century, 'The Age of Wonder' and which Holmes now radically redefines as 'the revolution of Romantic Science'.

The book opens with Joseph Banks, botanist on Captain Cook's first Endeavour voyage, stepping onto a Tahitian beach in 1769, hoping to discover Paradise. Many other voyages of discovery swiftly follow, while Banks, now President of the Royal Society in London, becomes our narrative guide to what truly emerges as an Age of Wonder.

Banks introduces us to the two scientific figures that dominate the book: astronomer William Herschel and chemist Humphry Davy. Herschel's tireless dedication to the stars, assisted (and perhaps rivalled) by his comet-finding sister Caroline, changed forever the public conception of the solar system, the Milky Way galaxy and the meaning of the universe itself. Davy first shocked the scientific community with his near-suicidal gas experiments in Bristol, then went on to save thousands of lives with his Safety Lamp and established British chemistry as the leading professional science in Europe. But at the cost, perhaps, of his own heart.

Holmes proposes a radical vision of science before Darwin, exploring the earliest ideas of deep time and deep space, the creative rivalry with the French scientific establishment, and the startling impact of discovery on great writers and poets such as Mary Shelley, Coleridge, Byron and Keats. With his trademark sense of the human drama, he shows how great ideas and experiments are born out of lonely passion, how scientific discoveries (and errors) are made, how intense relationships are forged and broken by research, and how religious faith and scientific truth collide. The result is breathtaking in its originality, its story-telling energy, and not least, in its intellectual significance.

'Exuberant... Holmes suffuses his book with the joy, hope and wonder of the revolutionary era. Reading it is like a holiday in a sunny landscape, full of fascinating bypaths that lead to unexpected vistas... it succeeds inspiringly'' John Carey, Sunday Times

`I am a Richard Holmes addict. He is an incomparable biographer, but in The Age of Wonder, he rises to new heights and becomes the biographer not of a single figure, but of an entire unique period, when artist and scientist could share common aims and ambitions and a common language ... Only Holmes, who is so deeply versed in the people and culture of eighteenth-century science, could tell their story with such verve and resonance for our own time.' Oliver Sacks

'"The Age of Wonder" gives us... a new model for scientific exploration and poetic expression in the Romantic period. Informative and invigorating, generous and beguiling, it is, indeed, wonderful' Jenny Uglow, Guardian

'This is a book to linger over, to savour the tantalising details of the minor figures... "The Age of Wonder" allows readers to recapture the combined thrill of emerging scientific order and imaginative creativity' Lisa Jardine, Financial Times

'If ever there was an argument for a biographical analysis of complex scientific and technological history, this is it...well paced and rich in detail... Heartbreaking accounts of hope and fears, ambitions and disappointments dance along the pages. Even the choice of pictures gives us new insights into old favourites...There is no dry page in this visceral, spirited and sexy account' The Times

'Richard Holmes's stellar collective biography... gives a gripping account of the scientific research that inspired a sense of wonder in poets and experimenters alike... fascinating... this beautifully crafted book deserves all the praise it will undoubtedly attract. Well-researched and vividly written The Age of Wonder will fascinate scientists and poets alike' Literary Review

Richard Holmes is the author of the prize-winning and bestselling `The Age of Wonder', which was shortlisted for the Samuel Johnson Prize and won the Royal Society Prize for Science Books (UK) and the National Book Critics Circle Award for Nonfiction (USA). He has written many other books including `Falling Upwards', an uplifting account of the pioneering generation of balloon aeronauts, which was one of Time Magazine's Top 10 Non-Fiction Books of 2013. His trilogy exploring the Romantic Biographer at work, begun with the classic `Footsteps', and its companion volume `Sidetracks', is now completed by `This Long Pursuit'. His first biography, `Shelley: The Pursuit', won the Somerset Maugham Prize; `Coleridge: Early Visions' won the 1989 Whitbread Book of the Year Award; `Coleridge: Darker Reflections' won the Duff Cooper and the Heinemann Awards; `Dr Johnson & Mr Savage' won the James Tait Black Prize. He holds honorary doctorates from the Universities of East Anglia, East London and Kingston, and was Professor of Biographical Studies at the University of East Anglia from 2001 to 2007. He is an Honorary Fellow of Churchill College, Cambridge, a Fellow of the British Academy, and was awarded the OBE in 1992. He lives in London and Norfolk with the novelist Rose Tremain.

GOR001271510
9780007149520
0007149522
The Age of Wonder: How the Romantic Generation Discovered the Beauty and Terror of Science by Richard Holmes
Richard Holmes
Used - Very Good
Hardback
HarperCollins Publishers
2008-10-01
380
Short-listed for Dingle Prize 2009 Short-listed for BBC Samuel Johnson Prize for Non-Fiction 2009
Book picture is for illustrative purposes only, actual binding, cover or edition may vary.
This is a used book - there is no escaping the fact it has been read by someone else and it will show signs of wear and previous use. Overall we expect it to be in very good condition, but if you are not entirely satisfied please get in touch with us
Trustpilot