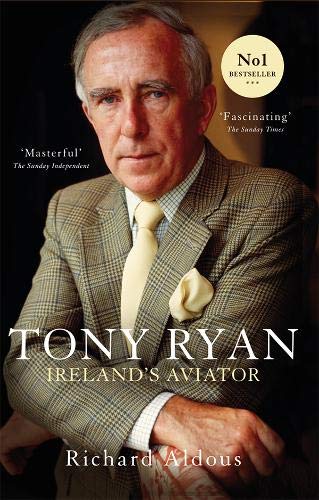 In this authorised biography of one of the most remarkable Irishmen of the twentieth century, Richard Aldous is independent in his judgements and frank in his examination of his subject's shortcomings and eccentricities. But most of all, he writes with verve and pace.

Tony Ryan was one of the greatest Irishmen of the twentieth century.

Ingenious, driven and sometimes reckless, his sheer spirit and adventurousness made him Ireland's Aviator. Born in a railwayman's cottage in County Tipperary he rose to enormous success. Ryan set up the airline leasing company, Guinness Peat Aviation (GPA), which quickly became the largest such enterprise in the world. But it famously crashed and burned and Ryan lost almost everything.

What remained was a little airline called Ryanair which was chronically loss making. Ryan set about turning Ryanair around, putting in one of his assistants, Michael O'Leary, to help knock it into shape. The rest is history.

Richard Aldous gives an irresistible insight into the machinations of the man who epitomised what it means to be an entrepreneur.

"A former head of Aer Lingus, Michael Dargan has observed: 'The magnitude of Tony Ryan's success is baffling. The historian may record it, but he can hardly explain it.' Richard Aldous makes a good stab at it." -- Joe Carroll * The Irish Catholic *
"Failure and redemption are themes peppered throughout this book as Mr Ryan's ambition, hard work, luck and stubbornness led him to grow a global aircraft owning and leasing entity followed by the world's most profitable low cost carrier." -- Joe Gill, Director of Corporate Broking at Goodbody, Finance Dublin
'Tony Ryan biographer Richard Aldous weaves a tapestry of tales about Ryanair's (and the entrepreneur's) fortunes (...). With Aldous having explored the late Tony Ryan's life in the capacity of an official biographer, it's fair to say that one approaches a work such as this with a strong degree of trepidation. Forebodings of a fawning eulogy abounded. But it does reveal the warts as well as the successes of the Tipperary native. -- John Mullingan * Irish Independent *
Somehow he managed to leave them still loving him anyway. -- Patricia O'Neill * Irish Independent *
It gives an irresistible insight into the machinations of the man who helped to create what is now Ireland's second biggest company - Ryanair. -- John Mulligan * Sunday Independent Review *
Tony lived lavishly and elegantly and was a larger than life character who only knew how to play high risk. This often had disastrous consequences, but his tenacity and determination to succeed are the real lessons of this book and as the nation strives for recovery Tony Ryan's story is an inspirational one. * The Nationalist *
Richard Aldous holds the Eugene Meyer Chair at Bard College, New York, having previously taught for fifteen years at UCD. He is the bestselling author of numerous books, including Great Irish Speeches, Reagan and Thatcher and The Lion and the Unicorn: Gladstone vs. Disraeli.
GOR006316963
9780717165520
0717165523
Tony Ryan: Ireland's Aviator by Richard Aldous
Richard Aldous
Used - Very Good
Paperback
Gill
2014-09-19
288
N/A
Book picture is for illustrative purposes only, actual binding, cover or edition may vary.
This is a used book - there is no escaping the fact it has been read by someone else and it will show signs of wear and previous use. Overall we expect it to be in very good condition, but if you are not entirely satisfied please get in touch with us
Trustpilot