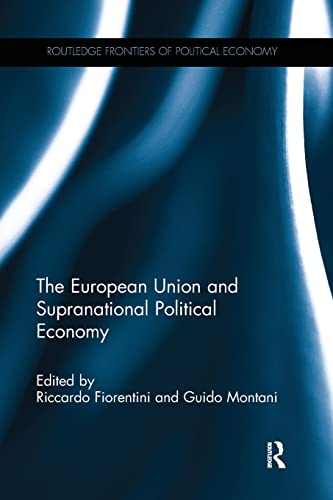 The European Union and Supranational Political Economy by Riccardo Fiorentini

The European Union and Supranational Political Economy by Riccardo Fiorentini

The financial crisis - originated in 2008 in the United States - had a dramatic impact on the world economy. The European Union was immediately involved, but its reaction to the crisis was clearly inadequate. The misgovernment of the European economy not only put at risk the European Monetary Union, but it also caused further hindrances to the recovery of the global economy.

The global financial turmoil shook deep-rooted beliefs. The doctrine of international neo-liberalism is more and more criticized. Nevertheless, the critics of neo-liberalism focus their attention on the relationship between the state and the market, as if the nation states, with their international organisations, have enough power for an effective global governance of the world economy. The model of European supranational integration, though seriously imperfect, can suggest some new way out from the crisis - even at the world level - based on a new relationship between the supranational government of the Union and the market.

Part I: Birth of the supranational project 1. The Birth of the European Community: Supranational Ideals and National Interests Daniela Preda 2. European Integration: Contrasting Models and Perspectives Fabio Masini Part II: Europe between confederalism and federalism 3. Confederalism as a solution for Europe John McCormick 4. Beyond the 'ever closer union' - national interests, institutional power shifts, and threats to the 'permissive consensus' in Germany Roland Sturm 5. The neo-liberal defeat of European integration and the need for a supranational political economy Zoltan Pogatsa 6. Can the EU be democratised? A political economy analysis. Heikki Patomaki 7. Res Publica Europaea: A Citizens-Based Concept To Re-Think Political Integration of Europe Ulrike Guerot Part III: Policy issues 8 Analysis and measurement of the state of integration and supranational prospects in the EU Tibor Palankai 9. From an 'austere' monetary union to a federal union: more solidarity among European citizens Riccardo Fiorentini 10. Game changer? The transformation of global gas markets and the future of the EU-Russia energy relationship Richard Connolly Part IV: Political economy: from internationalism to supranationalism 11. Neo-liberalism, federalism and supranational political economy.Guido Montani 12. Dollars, euros, and debt in the American and European Monetary Unions Vito Tanzi 13. Against EUrocentrism: a new stage in the building of the European Republic Fernando Iglesias

NLS9781138226845
9781138226845
113822684X
The European Union and Supranational Political Economy by Riccardo Fiorentini
Riccardo Fiorentini
Routledge Frontiers of Political Economy
New
Paperback
Taylor & Francis Ltd
2016-11-11
294
N/A
Book picture is for illustrative purposes only, actual binding, cover or edition may vary.
This is a new book - be the first to read this copy. With untouched pages and a perfect binding, your brand new copy is ready to be opened for the first time
Trustpilot