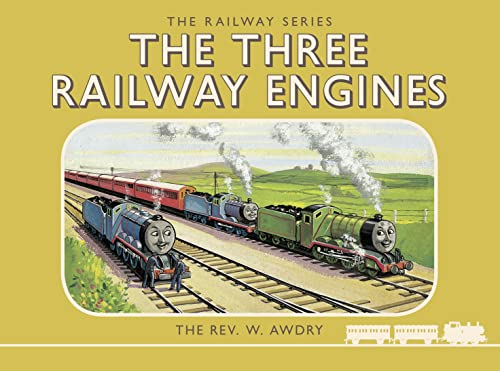 In The Three Railway Engines, we are introduced to Edward, Gordon and Henry, and find out how they came to be good friends.

In The Three Railway Engines, we are introduced to Edward, Gordon and Henry, and find out how they came to be good friends.

Thomas the Tank Engine and his friends remain as popular as ever, loved by millions all over the world. Now rediscover the classic stories about the world's best-loved tank engine with these stunning new hardback editions of the original 'Railway Series'.

Thomas has been teaching children lessons about life and friendship for over 75 years. He ranks alongside other beloved characters such as Paddington Bear, Winnie-the-Pooh and Peter Rabbit as an essential part of our literary heritage.

Now millions of people across the world have grown up with the tales of Sodor Island, enchanted by the adventures of Thomas and his friends, Percy, Gordon, and Toby, and all the other engines that work on the Fat Controller's railway.

Have you collected all the classic adventures?

The Thomas the Tank engines stories were created by the Reverend Wilbert Awdry, who was born in Hampshire in 1911. He grew up close to the railway and was convinced that the steam engines all had different personalities. He used to imagine conversations between them. Later when he was grown up and his son Christopher became ill with measles, Wilbert told stories Thomas the Tank Engine and his friends to entertain him. Christopher asked for more and more stories and Wilbert began writing them down. The first of the Railway Series books was published in 1945, and Awdry wrote 26 Railway books in total before his son, Christopher, took over the series. There have since been multiple, hugely popular, Thomas the Tank Engine TV series and films.

GOR007563968
9781405276498
1405276495
Thomas the Tank Engine: The Railway Series: The Three Railway Engines (Classic Thomas the Tank Engine) by Rev. W. Awdry
Rev. W. Awdry
Classic Thomas the Tank Engine
Used - Good
Hardback
HarperCollins Publishers
20150416
72
N/A
Book picture is for illustrative purposes only, actual binding, cover or edition may vary.
This is a used book - there is no escaping the fact it has been read by someone else and it will show signs of wear and previous use. Overall we expect it to be in good condition, but if you are not entirely satisfied please get in touch with us
Trustpilot