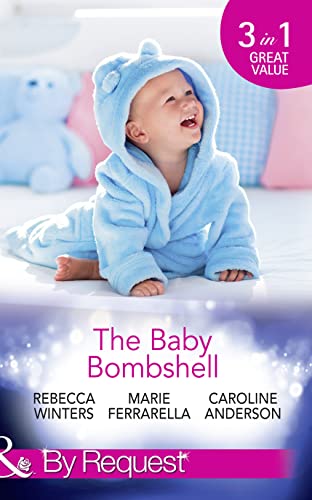 The Baby Bombshell by Rebecca Winters

The Baby Bombshell: The Billionaire's Baby Swap / Dating for Two / The Valtieri Baby by Rebecca Winters

Single mum Valentina Montanari is besotted with her tiny son, Ric. Gorgeous bachelor billionaire Giovanni Laurito bonded with his new baby, Vito. So, discovering Vito and Ric were swapped at birth is a huge shock! When Valentina and Giovanni have already fallen for each other's babies, could this create the family of their dreams?

Dating for Two by Marie Ferrarella

Focused on her company, Erin O'Brien didn't have time to think about romance. Until she met handsome lawyer Steve Kendall - and suddenly, dating became much more enticing! But she soon learned that the sexy lawyer has one tiny secret - a son! Can they become the perfect family?

The Valtieri Baby by Caroline Anderson

With no explanation Gio had ended his relationship with Anita, leaving her heartbroken. But a chance meeting leads to a night of passion and a baby bombshell! Now Gio must face the feelings he'd long ago buried. Will this brooding Italian make all Anita's dreams come true?

Rebecca Winters lives in Salt Lake City, Utah. With canyons and high alpine meadows full of wildflowers, she never runs out of places to explore. They, plus her favourite vacation spots in Europe, often end up as backgrounds for her romance novels because writing is her passion, along with her family and church. Rebecca loves to hear from readers. If you wish to e-mail her, please visit her website at: www.cleanromances.com This USA TODAY bestselling and RITA (R) Award-winning author has written more than two hundred books for Harlequin Books and Silhouette Books, some under the name Marie Nicole. Her romances are beloved by fans worldwide. Visit her website at www.marieferrarella.com. Caroline Anderson's been a nurse, a secretary, a teacher, and has run her own business. Now she's settled on writing. `I was looking for that elusive something and finally realised it was variety - now I have it in abundance. Every book brings new horizons, new friends, and in between books I juggle! My husband John and I have two beautiful daughters, Sarah and Hannah, umpteen pets, and several acres of Suffolk that nature tries to reclaim every time we turn our backs!'
GOR008688634
9780263929850
026392985X
The Baby Bombshell: The Billionaire's Baby Swap / Dating for Two / The Valtieri Baby by Rebecca Winters
Rebecca Winters
Used - Very Good
Paperback
HarperCollins Publishers
2017-10-05
592
N/A
Book picture is for illustrative purposes only, actual binding, cover or edition may vary.
This is a used book - there is no escaping the fact it has been read by someone else and it will show signs of wear and previous use. Overall we expect it to be in very good condition, but if you are not entirely satisfied please get in touch with us
Trustpilot