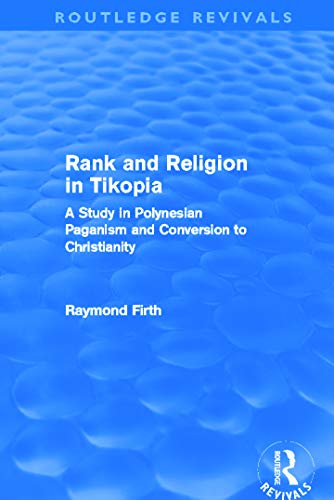 Rank and Religion in Tikopia by Raymond Firth

Rank and Religion in Tikopia: A Study in Polynesian Paganism and Conversion to Christianity. by Raymond Firth

Originally published in 1970, this book represents a unique study of beliefs and ritual practices in a pagan religion, and of the processes by which a transformation to Christianity took place.

Christianity came to the major islands of Polynesia nearly two centuries ago, and within a couple of generations, the traditional pagan religion had disappeared. Only a few remote islands such as Tikopia preserved their ancient cults.

Over eighty years ago, the author first observed and took part in these pagan rites, and on later visits he studied the change from paganism to Christian faith. Unique in its rich documentation, this book presents a systematic account of the traditional beliefs in gods and spirits and of the way in which these were fused with the social and political structure. The causes and dramatic results of the conversion to Christianity are then described, ending with an examination of the religious situation at the time of the book's original publication.

The book is both a contribution to anthropology and a case study in religious history. It completes the major series of studies of Tikopia society for which the author is famous. It gives the first full account of a Polynesian religious system in a state of change.

1. Traditional Tikopia Religion and Society 2. Pagan Religious Leaders 3. Concepts of Spirit 4. Material Symbols of Spirits 5. Spirit Patterns and the Social Structure 6. Samples of Theography 7. A Basic Religious Rite - the Kava 8. Variations in Ritual Acts and Expressions 9. Spirit Mediumship: A Belief in Two-way Communication 10. Epitome of Tikopia Pagan Worship 11. The Advance of Christianity in Tikopia 12. Paganism in Adjustment and Decline 13. Christianity in an Intermediate Phase 14. The Triumph of Complete Conversion 15. Reflections on Religious Change

NLS9780415694711
9780415694711
041569471X
Rank and Religion in Tikopia: A Study in Polynesian Paganism and Conversion to Christianity. by Raymond Firth
Raymond Firth
New
Paperback
Taylor & Francis Ltd
2012-11-22
428
N/A
Book picture is for illustrative purposes only, actual binding, cover or edition may vary.
This is a new book - be the first to read this copy. With untouched pages and a perfect binding, your brand new copy is ready to be opened for the first time
Trustpilot