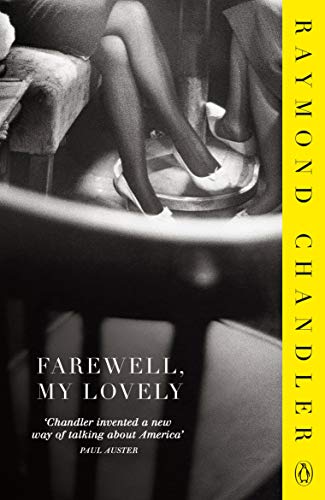 Farewell, My Lovely by Raymond Chandler

Eight years ago Moose Malloy and cute little redhead Velma were getting married - until someone framed Malloy for armed robbery. Now his stretch is up and he wants Velma back. PI Philip Marlow meets Malloy one hot day in Hollywood and, out of the generosity of his jaded heart, agrees to help him.

Farewell, My Lovely by Raymond Chandler

'I needed a drink, I needed a lot of life insurance, I needed a vacation, I needed a home in the country. What I had was a coat, a hat and a gun. I put them on and went out of the room'

Cynical Los Angeles Private Investigator Philip Marlowe always falls for a sob story. Eight years ago Moose Malloy and cute little redhead Velma were getting married - until Malloy was framed for armed robbery. Now he's out and he wants Velma back. Marlowe meets Malloy one hot day in Hollywood and, out of the generosity of his jaded heart, agrees to help. Dragged from one smoky bar to another, Marlowe's search for Velma turns up plenty of gangsters with a nasty habit of shooting first and talking later. And soon what started as a search for a missing person becomes a matter of life and death . . .

'Chandler grips the mind from the first sentence' Daily Telegraph

'One of the greatest crime writers, who set standards others still try to attain' Sunday Times

'Chandler is an original stylist, creator of a character as immortal as Sherlock Holmes' Anthony Burgess

Discover the newest addition to the inimitable Philip Marlowe series - Only to Sleep by Lawrence Osborne - out 6 September 2018 in hardback and ebook from Hogarth.

Best-known as the creator of the original private eye, Philip Marlowe, Raymond Chandler was born in Chicago in 1888 and died in 1959. Many of his books have been adapted for the screen, and he is widely regarded as one of the very greatest writers of detective fiction.
GOR008513719
9780241954355
0241954355
Farewell, My Lovely by Raymond Chandler
Raymond Chandler
Phillip Marlowe
Used - Like New
Paperback
Penguin Books Ltd
2005-07-29
320
N/A
Book picture is for illustrative purposes only, actual binding, cover or edition may vary.
The book has been read, but looks new. The book cover has no visible wear, and the dust jacket is included if applicable. No missing or damaged pages, no tears, possible very minimal creasing, no underlining or highlighting of text, and no writing in the margins
Trustpilot