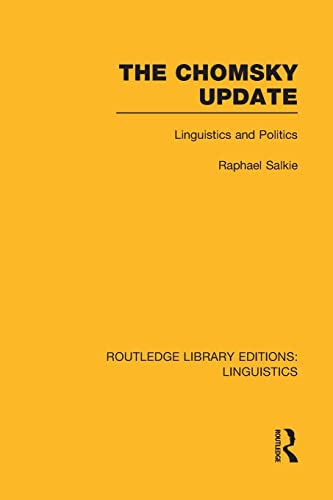 The Chomsky Update by Raphael Salkie

The Chomsky Update by Raphael Salkie

Noam Chomsky has been described as 'arguably the most important intellectual alive'. His revolutionary work in linguistics has aroused intense scholarly interest, while his trenchant critique of United States foreign policy and his incisive analysis of the role of intellectuals in modern society have made him a prominent public figure.

Raphael Salkie's timely book introduces the two parts of Chomsky's work and explores the connections between them. He provides an accessible and up-to-date introduction to Chomsky's linguistics, laying out his basic assumptions and aims - in particular, his consistent drive to make linguistics a science - and looking at a sample of Chomsky's recent work. He examines the implications for other fields such as philosophy and psychology, as well as the main challenges to Chomsky's position.

Raphael Salkie also sets out the key themes in Chomsky's political writings and his libertarian socialist views. He contrasts the 'official line' on US foreign policy - the view that the US is a 'well-meaning, blundering giant' - with Chomsky's carefully argued alternative view. By focusing on Chomsky's conception of human nature and human freedom the author draws out the links between the two sides of Chomsky's work, in the belief that both sides raise issues which can profitably be explored. The author also provides a carefully annotated guide to further reading.

As an experienced teacher of linguistics with a commitment to political activism, Raphael Salkie is uniquely qualified to present this introduction to one of the seminal thinkers of our time.

NLS9781138997721
9781138997721
1138997722
The Chomsky Update by Raphael Salkie
Raphael Salkie
Routledge Library Editions: Linguistics
New
Paperback
Taylor & Francis Ltd
2015-11-26
252
N/A
Book picture is for illustrative purposes only, actual binding, cover or edition may vary.
This is a new book - be the first to read this copy. With untouched pages and a perfect binding, your brand new copy is ready to be opened for the first time
Trustpilot