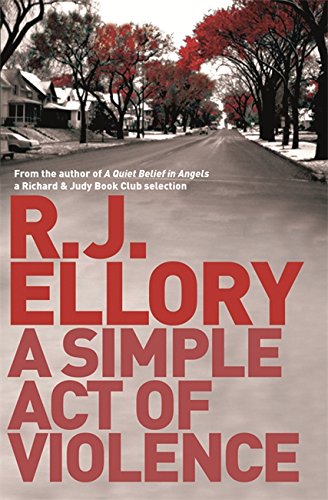 A Simple Act of Violence by R.J. Ellory

Washington has a new menace... a serial killer whose victims don't exist...

A Simple Act of Violence by R.J. Ellory

Washington has a new menace... a serial killer whose victims don't exist...

Washington, embroiled in the mid-term elections, did not want to hear about serial killings. But when the newspapers reported a fourth murder, when they gave the killer a name and details of his horrendous crimes, there were few people that could ignore it.

Detective Robert Miller is assigned to the case. He and his partner begin the task of correlating and cross-referencing the details of each crime scene. Rapidly things begin to complicate. The victims do not officially exist. Their personal details do not register on any known systems. The harder Miller works, the less it makes sense. And as Miller unearths ever more disturbing facts, he starts to face truths so far-removed from his own reality that he begins to fear for his life.

This is a novel about trust, loyalty, and beliefs that are so ingrained which, when challenged, they leave people with nothing. Vast in scope, A SIMPLE ACT OF VIOLENCE is an expose of the brutality of covert operations, the power of greed and the insidious nature of corruption. It is also a story of love and trust that somehow managed to survive the very worst that the world could throw at it.

GOR001856064
9780752891903
0752891901
A Simple Act of Violence by R.J. Ellory
R.J. Ellory
Used - Good
Hardback
Orion Publishing Co
2008-10-02
512
Winner of Theakstons Old Peculier Crime Novel of the Year 2010 (UK)
Book picture is for illustrative purposes only, actual binding, cover or edition may vary.
This is a used book - there is no escaping the fact it has been read by someone else and it will show signs of wear and previous use. Overall we expect it to be in good condition, but if you are not entirely satisfied please get in touch with us
Trustpilot