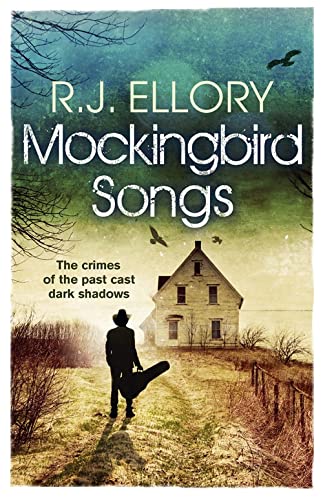 The powerful new thriller from the bestselling author of CARNIVAL OF SHADOWS and A QUIET BELIEF IN ANGELS.

Henry Quinn only survived three years inside because of Evan Riggs, a one-time country singer, one-time killer, now serving a life sentence, no parole. On the day he gets out, Henry promises Evan he will find his daughter, the daughter he never met, and deliver a letter.

A free man, Henry heads to the small Texan town where Evan grew up and where his brother Carson is Sheriff. There's no sign of the girl, and her uncle claims to know nothing of her whereabouts. But Henry isn't about to give up.

Carson's behaviour towards him grows threatening, and Henry realises that there are dark secrets buried at the heart of this quiet town. What terrible thing drove the brothers apart, and what happened to Evan's daughter?

As always, R J Ellory writes with compassion and empathy, taking readers on a journey that's emotional, intriguing and breath-taking in scope as his characters grow and develop. -- Karen Byrom * My Weekly *
R.J. Ellory is a critically acclaimed author whose novels include the bestselling A Quiet Belief in Angels, which was a Richard & Judy Book Club selection and won the Nouvel Observateur Crime Fiction Prize. Ellory's novels have been translated into twenty-six languages, and he has won the USA Excellence Award for Best Mystery, the Strand Magazine Best Thriller 2009, the Theakston's Old Peculier Crime Novel of the Year for A Simple Act of Violence, the St Maur Prize, the Avignon Readers' Prize, the Livre de Poche Award and the Quebec Laureat. He has been shortlisted for a further thirteen awards in numerous countries, including four Daggers from the UK Crime Writers' Association. Despite the American setting of his novels, Ellory is British and currently lives in England with his wife and son. To find out more visit www.rjellory.com or follow him on Twitter @rjellory
GOR009633700
9781409121350
1409121356
Mockingbird Songs by R.J. Ellory
R.J. Ellory
Used - Like New
Paperback
Orion Publishing Co
2016-05-05
352
N/A
Book picture is for illustrative purposes only, actual binding, cover or edition may vary.
The book has been read, but looks new. The book cover has no visible wear, and the dust jacket is included if applicable. No missing or damaged pages, no tears, possible very minimal creasing, no underlining or highlighting of text, and no writing in the margins
Trustpilot