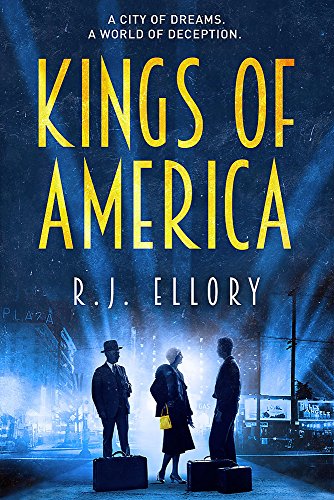 From the author of A QUIET BELIEF IN ANGELS comes an epic new novel that will span the Golden Age of Hollywood, from the 1930s to the 1960s, and will include appearances from Raymond Chandler, William Faulkner, Mickey Cohen and F. Scott Fitzgerald.

Danny McCabe is on the run. He committed a terrible crime. And he'd do it again.

A promising boxer back in his native Ireland, he had to start over with a new life and a new home, halfway across the world in up-and-coming New York City.

A chance encounter tangles his life up with fellow immigrants Nicky and Lucia Mariani. The siblings came to the land of opportunity with high hopes and little else. As Danny scrapes by, Lucia dreams of Hollywood stardom, while Nicky's reckless ambition measures success only in money and power.

They are the only family Danny has. He would do anything for them. But every family has its secrets -- even from each other . . .

This is a sweeping story set over three decades, from Europe to America, from the slums and tenements of New York to the glitz and glamour of the Hollywood Hills, from the dark heart of the American Dream to an impossible choice . . .

An intriguing, delightfully unpredictable novel - Mail on SundayEllory raises interesting questions about society and our fear to question - Daily ExpressBeautiful and haunting ... a tour de forceEllory's distinctive voice ... confirms his place in the top flight of crime writing - Sunday Telegraph

GOR011902444
9781409163121
1409163121
Kings of America by R.J. Ellory
R.J. Ellory
Used - Well Read
Paperback
Orion Publishing Co
20170518
432
N/A
Book picture is for illustrative purposes only, actual binding, cover or edition may vary.
This is a used book. We do our best to provide good quality books for you to read, but there is no escaping the fact that it has been owned and read by someone else previously. Therefore it will show signs of wear and may be an ex library book
Trustpilot