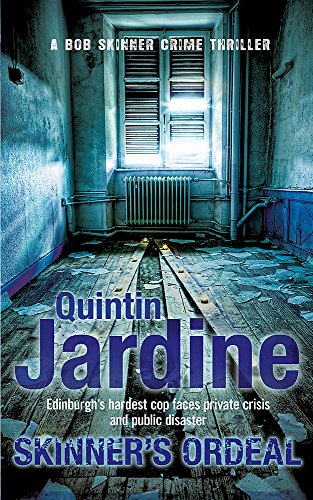 Skinner faces both the biggest case of his career and crippling personal crisis in Skinner's Ordeal, the thrilling fifth novel in Quintin Jardine's bestselling Edinburgh crime series. Perfect for fans of Ian Rankin and Peter Robinson.

A mid-air explosion; a plane plunges to disaster from the Scottish skies, the British and American Defence Secretaries among the victims. Out of the blue, Edinburgh's Deputy Chief Constable finds himself leading the biggest investigation of his career. The means of destruction is apparent from the start, but the investigation quickly grows more puzzling - for once they have an embarrassment of suspects with motive and opportunity. Then sudden random violence wrenches Skinner himself out of the picture. While his colleagues struggle with the mass of clues, he lies on the brink of death, trapped with the horrors from his own hidden past. As Skinner's ordeal reaches its crescendo, the police pursue their suspects one by one, until at last they are brought to a dramatic, thrilling, but tragic conclusion.

What readers are saying about Skinner's Ordeal:

'An excellent read, and one of the best thrillers in ages'

'What a book, what a story. Magnificent'

'A really gripping thriller, with many twists and turns'

Quintin Jardine was born once upon a time in the West - of Scotland rather than America, but still he grew to manhood as a massive Sergio Leone fan. On the way there he was educated, against his will, in Glasgow, where he ditched a token attempt to study law for more interesting careers in journalism, government propaganda, and political spin-doctoring. After a close call with the Brighton Bomb in 1984, he moved into the even riskier world of media relations consultancy, before realising that all along he had been training to become a crime writer. Now, forty novels later, he never looks back. Along the way he has created/acquired an extended family in Scotland and Spain. Everything he does is for them. He can be tracked down through his blog: http://quintinjardine.me
GOR002048328
9780755357741
0755357744
Skinner's Ordeal (Bob Skinner series, Book 5): An explosive Scottish crime novel by Quintin Jardine
Quintin Jardine
Bob Skinner
Used - Very Good
Paperback
Headline Publishing Group
2010-02-04
448
N/A
Book picture is for illustrative purposes only, actual binding, cover or edition may vary.
This is a used book - there is no escaping the fact it has been read by someone else and it will show signs of wear and previous use. Overall we expect it to be in very good condition, but if you are not entirely satisfied please get in touch with us
Trustpilot