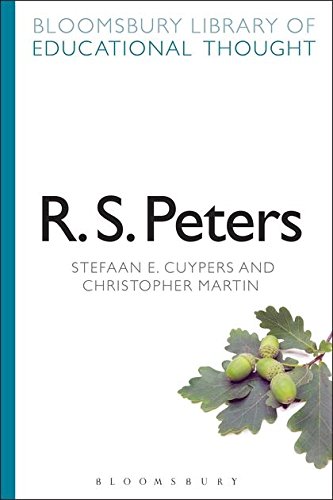 What does it mean to say that someone is an educated person? How do we know what's worth including in a school curriculum? Is a good moral education about developing good habits, or critical thinking? What role does the development of knowledge and understanding play in living a good life? These are all questions that were robustly taken up by the philosopher of education, R.S. Peters. In an era of immense reform (and confusion) about the values, aims and purposes of education, Peters developed a clear and nuanced account of what education is really about and how educational policy and practice can make good on its promise. This text undertakes a careful and accessible reconstruction of the major themes of Peters' thought in order to demonstrate the continuing relevance of his project, both for educational researchers and teachers and student teachers seeking to better understand the nature and scope of their work and study.
An essential and long overdue critical guide to the work of the most significant educational philosopher of the 20th century. Informative, comprehensive, well organised and clearly written, it brings out the breadth, scope, and practical relevance of Peters' work. Particularly to be noted is the authors' awareness of Peters' recognition of the social context of educational discourse. -- Robin Barrow, Professor of Philosophy of Education, Simon Fraser University, Canada
Cuypers and Martin reveal the richness of Peters' thinking about education, including his concern for the human condition and the predicaments of life, and his emphasis on the moral value of the work done by those engaged in the educational enterprise. Erudite, yet written with ease and clarity, their book shows both the overarching trajectories and nuanced details of Peters' thought. This book is a great companion for readers already familiar with Peters' work, as well as for those looking for an entry point into the complexity of his central ideas. The authors demonstrate the relevance of philosophy of education as a unique discipline that can significantly contribute to contemporary discussions on educational policy and practice. -- Andrea R. English, Assistant Professor of Philosophy of Education, Mount Saint Vincent University, Canada
The late Richard Stanley Peters was the British architect of post-war philosophy of education as a worthwhile branch of modern analytical philosophy and a philosopher of global significance and reputation. Hard on the heels of his recent passing, this clear, accomplished and overdue appreciation and celebration of Peters work - by two distinguished contemporary educational philosophers of Peters' own analytical temper and rigour - could hardly be more timely, and one may be certain that it would have been received with much pride and gratitude by the subject of this study himself. Like Peters' own output, this work is a shining example of philosophical insight and clarity at its best, and - for this as well as its subject matter - should be compulsory reading for all who might aspire to contribute further serious work to the field of philosophy of education. -- David Carr, Professor of Ethics and Education, University of Birmingham, UK
Stefaan E. Cuypers is Professor of Philosophy at the KU Leuven University, Belgium. He works in philosophy of education, philosophy of mind and epistemology. He is the author of Self-Identity and Personal Autonomy (2001), the co-author, together with Ishtiyaque Haji, of Moral Responsibility, Authenticity, and Education (2008), and an invited contributor to The Oxford Handbook of Philosophy of Education (2009), edited by Harvey Siegel. Christopher Martin is Assistant Professor of Education at the University of British Columbia, Kelowna, Canada. He works in philosophy of education, moral and political philosophy and moral education. He is the author of Education in a Post-Metaphysical World: Rethinking Educational Policy and Practice (2012) and co-editor, together with Stefaan E. Cuypers, of Reading R. S. Peters Today. Analysis, Ethics and the Aims of Education (2011).
Series Editor's Preface Foreword Acknowledgements Part I: Intellectual Biography of R.S. Peters 1. Peters' Analytic Paradigm in the Philosophy of Education Part II: Critical Exposition of R.S. Peters' Educational Thought 2. The Concept of Education, Aims, and Educational Processes 3. Initiation and the Educated Person 4. The Ethical Justification of Education 5. Liberal Education, the Quality of Life, and Teacher Training 6. Comprehensive Moral Education and Personal Autonomy 7. Educating the Emotions and the Life of Reason Part III: Reception and Relevance of R.S. Peters' Work 8. The Impact and Importance of Peters' Analytic Paradigm Notes Bibliography Index
NPB9781472518798
9781472518798
1472518799
R. S. Peters by Professor Stefaan E. Cuypers
Professor Stefaan E. Cuypers
Bloomsbury Library of Educational Thought
New
Paperback
Bloomsbury Publishing PLC
20141023
264
N/A
Book picture is for illustrative purposes only, actual binding, cover or edition may vary.
This is a new book - be the first to read this copy. With untouched pages and a perfect binding, your brand new copy is ready to be opened for the first time
Trustpilot