The Woman of Substance Piers Dudgeon 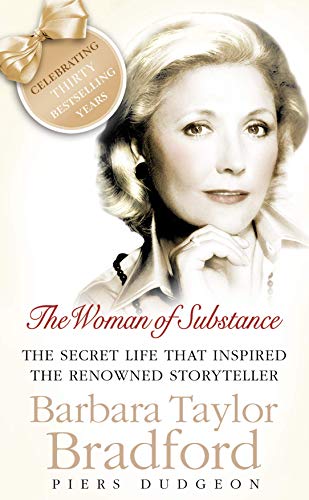 The Woman of Substance by Piers Dudgeon

For the first time ever, a fascinating look at the remarkable life of Barbara Taylor Bradford. From the cobbled streets of Yorkshire to the sweeping avenues of Manhattan, Barbara's own story is as dramatic a tale as any one of her bestsellers.

The Woman of Substance: The Life and Work of Barbara Taylor Bradford by Piers Dudgeon

A fascinating look at the remarkable life of Barbara Taylor Bradford, bestselling author of the unforgettable A Woman of Substance

From the cobbled streets of Yorkshire to the sweeping avenues of Manhattan, Barbara's own story is as dramatic a tale as any one of her bestsellers.

Barbara Taylor Bradford's rise to fame and fortune was a difficult one. But from an early age her mother marked her out for glory - at any cost. The drive and ambition instilled in Barbara were to reap huge rewards. From humble beginnings in Yorkshire she took London's Fleet Street by storm. And then, with the creation of Emma Harte, the unforgettable heroine of her first novel A Woman of Substance, she inspired women the world over - and became one of the world's bestselling authors.

This is the first time that Barbara Taylor Bradford has been involved in a memoir of any kind and this unique collaboration has produced an extraordinary story. For Emma Harte's rise from Edwardian kitchen maid, single and pregnant, to one of the richest women in the world uncannily mirrors Barbara's own family history - something which was as much of a shock to Barbara as it will be to her millions of fans...

Don't miss this incredible story of suffering, loss and triumph over adversity, a must-read for any A Woman of Substancefan.

'Enthralling...a story no less gripping than any of her blockbusters' You

Piers Dudgeon is a writer, ediitor and photographer. He worked for ten years as a publisher in London before starting his own company and developing books with authors as diverse as John Fowles, Ted Hughes, Daphne du Maurier, Catherine Cookson, Peter Ackroyd and Susan Hill. In 1993, he moved from London to a village on the North Yorkshire moors. He has written ten works of non-fiction, including the no. 1 bestselling biography of Catherine Cookson, The Girl from Leam Lane, as well as feature articles for the Observer, the Daily Telegraph and the Mail on Sunday.

GOR001173645
9780007165698
0007165692
The Woman of Substance: The Life and Work of Barbara Taylor Bradford by Piers Dudgeon
Piers Dudgeon
Used - Very Good
Paperback
HarperCollins Publishers
2006-03-06
480
N/A
Book picture is for illustrative purposes only, actual binding, cover or edition may vary.
This is a used book - there is no escaping the fact it has been read by someone else and it will show signs of wear and previous use. Overall we expect it to be in very good condition, but if you are not entirely satisfied please get in touch with us
Trustpilot