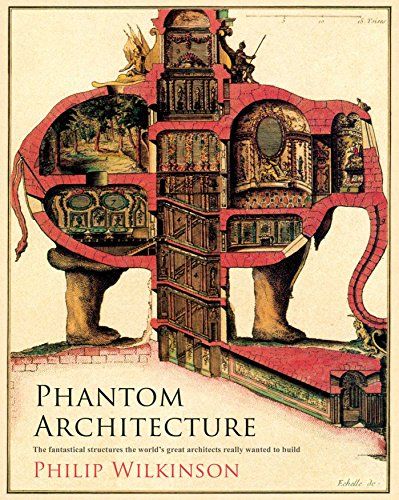 Phantom Architecture tells the stories of some fifty unbuilt buildings, describing how they were conceived, exploring their amazing variety, and showing how they have inspired other architects and artists who have looked at their plans in amazement and awe.

'60 fantastical structures described and illustrated in this colourful and highly entertaining book.' The Sunday Times

'If you can't think of a present for the armchair architect in your life - well, problem solved' The Daily Telegraph

'These ghostly architectural echoes entrance the reader.' The Field

A skyscraper one mile high, a dome covering most of downtown Manhattan, a triumphal arch in the form of an elephant: some of the most exciting buildings in the history of architecture are the ones that never got built.

These are the projects in which architects took materials to the limits, explored challenging new ideas, defied conventions, and pointed the way towards the future. Some of them are architectural masterpieces, some simply delightful flights of fancy. It was not usually poor design that stymied them - politics, inadequate funding, or a client who chose a 'safe' option rather than a daring vision were all things that could stop a project leaving the drawing board.

These unbuilt buildings include the grand projects that acted as architectural calling cards, experimental designs that stretch technology, visions for the future of the city, and articles of architectural faith. Structures likeBuckminster Fuller's dome over New York or Frank Lloyd Wright's mile-high tower can seem impossibly daring. But they also point to buildings that came decades later, to the Eden Project and the Shard.

Some of those unbuilt wonders are buildings of great beauty and individual form like Etienne-Louis Boullee's enormous spherical monument to Isaac Newton; some, such as the city plans of Le Corbusier, seem to want to teach us how to live; some, like El Lissitsky's 'horizontal skyscrapers' and Gaudi's curvaceous New York hotel, turn architectural convention upside-down; some, such as Archigram's Walking City and Plug-in City, are bizarre and inspiring by turns. All are captured in this magnificently illustrated book.

GOR008930091
9781471166419
1471166414
Phantom Architecture by Philip Wilkinson
Philip Wilkinson
Used - Very Good
Hardback
Simon & Schuster Ltd
2017-11-01
256
N/A
Book picture is for illustrative purposes only, actual binding, cover or edition may vary.
This is a used book - there is no escaping the fact it has been read by someone else and it will show signs of wear and previous use. Overall we expect it to be in very good condition, but if you are not entirely satisfied please get in touch with us
Trustpilot