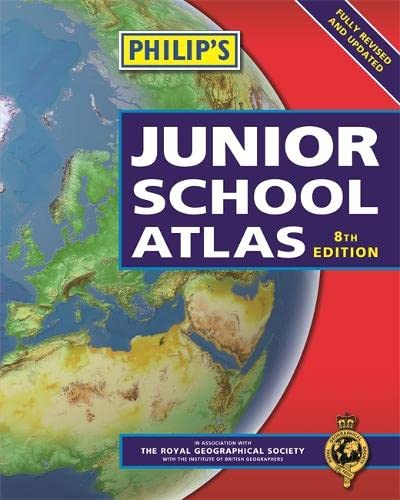 The market-leading atlas for pupils at primary schools, Philip's Junior School Atlas has been fully revised and updated for its 8th edition, and is available in both paperback and hardback editions.

The market-leading atlas for pupils at primary schools, Philip's Junior School Atlas has been fully revised for its 8th edition. It is a stimulating and authoritative first introduction to the world of maps.

The introductory section describes the meaning of scale, how to measure distances using the maps, and explains the symbols on the maps.

The following section is devoted to the United Kingdom and Ireland. Thematic maps cover topics such as mountains and rivers, climate and weather, population and cities, farming and fishing, industry and energy, transport, tourism and conservation. Regional maps of England and Wales, Scotland and Ireland complete this section.

The rest of the atlas is made up of world thematic maps and world continental maps. Included are topics such as the world's climate, vegetation, agriculture, energy sources, and environmental concerns, such as global warming.

A simple letter-figure index completes the atlas - a useful introduction to help the young reader find his/her way around the maps.

GOR006450402
9781849073103
1849073104
Philip's Junior School Atlas: 8th Edition by Philip's Maps
Philip's Maps
Used - Very Good
Paperback
Octopus Publishing Group
2014-06-02
64
N/A
Book picture is for illustrative purposes only, actual binding, cover or edition may vary.
This is a used book - there is no escaping the fact it has been read by someone else and it will show signs of wear and previous use. Overall we expect it to be in very good condition, but if you are not entirely satisfied please get in touch with us
Trustpilot