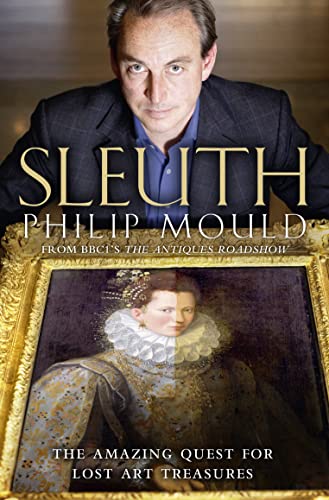 CSI meets Who Do You Think You Are? meets Time Team meets The Antiques Roadshow. Two-dimensional works of art become three-dimensional thrillers.

CSI meets Who Do You Think You Are? meets Time Team meets The Antiques Roadshow. Two-dimensional works of art become three-dimensional thrillers.

Philip Mould is an international art dealer who has lived the high stakes game of art sleuthing for twenty years. In Sleuth, we encounter the fascinating dealers, experts, auctioneers and restorers who risk fortunes and reputations to turn overlooked artworks into coveted treasures.

Sleuth is laced with dramas:
* Gainsborough's earliest picture emerges in a Los Angeles saleroom - the author has three days to find the missing facts and decide what to pay.
* The most powerful man in the art establishment, with the influence to elevate a copy into a priceless original, is asked to look at a 'fake' Rembrandt self portrait: if he says yes a GBP5,000 picture turns into GBP5 million masterpiece.
* A Vermont professor unlocks the door of a defunct Catholic church to reveal a hidden cache of 300 portraits.
* An auctioneer notices from the upper story of a bus that Damien Hirst's restaurant is being dismantled. He swoops in and sells the fixtures and fittings for GBP13 million.

Sleuth is a series of stories which not only reveals the extraordinary culture of detection but the people behind it. Paintings and their discovery become a way into the minds, preoccupations and professions of a raft of influential figures beyond the commercial and museum facade - men and women who have shaped their lives in pursuit of truth and profit through art.

"Reviewing can make you hate books - the grim spectre of the copy deadline means that other tasks (cleaning the fridge is popular) can seem attractive compared with just getting on reading the book. Sleuth was different. I could not wait to get back to it" Sunday Telegraph

`This is no dry treatise and Mould is a first-class scene setter ... There is an immediacy to much of the writing, which draws the reader in ... the sort of book that may well do more to attract future talent to the world of art dealing than any number of university art history courses' Antiques Trade Gazette

Philip Mould OBE is one of the UK's foremost authorities on British art, and is widely consulted by galleries, private collectors and the media. He is the author of the acclaimed Sleepers (released in paperback as The Trail of Lot 163), both published by Fourth Estate. He is also a regular broadcaster, reviewer and writer for the national press. His television work includes writing and presenting the Channel 4 series Changing Faces, co-presenting BBC2's Antiques Show, and as an expert on the ever-popular The Antiques Roadshow (which has a regular audience of almost six million).

GOR003297650
9780007319152
0007319150
Sleuth: The Amazing Quest for Lost Art Treasures by Philip Mould
Philip Mould
Used - Very Good
Paperback
HarperCollins Publishers
2011-06-23
320
N/A
Book picture is for illustrative purposes only, actual binding, cover or edition may vary.
This is a used book - there is no escaping the fact it has been read by someone else and it will show signs of wear and previous use. Overall we expect it to be in very good condition, but if you are not entirely satisfied please get in touch with us
Trustpilot