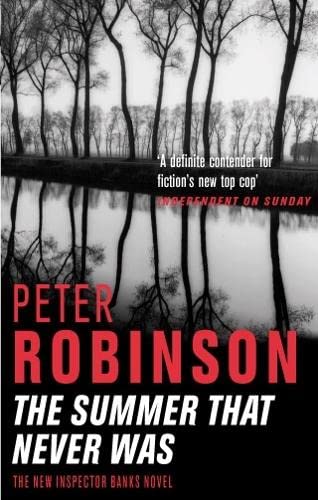 The Summer That Never Was by Peter Robinson

Following the best-selling AFTERMATH, the new Inspector Banks mystery is guaranteed to win yet more fans

The Summer That Never Was by Peter Robinson

A skeleton has been unearthed. Soon the body is identified, and the horrific discovery hits the headlines . . .

Fourteen-year-old Graham Marshall went missing during his paper round in 1965. The police found no trace of him. His disappearance left his family shattered, and his best friend, Alan Banks, full of guilt . . .

That friend has now become Chief Inspector Alan Banks, and he is determined to bring justice for Graham. But he soon realises that in this case, the boundary between victim and perpetrator, between law-guardian and law-breaker, is becoming more and more blurred . . .

THE SUMMER THAT NEVER WAS is the thirteenth Inspector Banks mystery. The series has won numerous awards in Britain, Europe, Canada and the United States. The new Inspector Banks novel, PLAYING WITH FIRE, will be published in hardback in January 2004.

Peter Robinson grew up in Yorkshire, but now lives in Toronto.

GOR000503472
9780330489355
0330489356
The Summer That Never Was by Peter Robinson
Peter Robinson
The Inspector Banks series
Used - Very Good
Paperback
Pan Macmillan
2003-09-05
512
N/A
Book picture is for illustrative purposes only, actual binding, cover or edition may vary.
This is a used book - there is no escaping the fact it has been read by someone else and it will show signs of wear and previous use. Overall we expect it to be in very good condition, but if you are not entirely satisfied please get in touch with us
Trustpilot