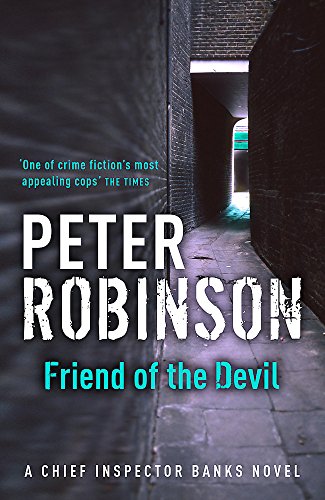 Friend of the Devil by Peter Robinson

Inspector Banks is back in this stunning new novel from bestselling author Peter Robinson.

Friend of the Devil: DCI Banks 17 by Peter Robinson

When Karen Drew is found sitting in her wheelchair staring out to sea with her throat cut one chilly morning, DI Annie Cabbot, on loan to Eastern Area, gets lumbered with the case. Back in Eastvale, that same Sunday morning, 19-year-old Hayley Daniels is found raped and strangled in the Maze, a tangle of narrow alleys behind Eastvale's market square, after a drunken night on the town with a group of friends, and DCI Alan Banks is called in. Banks finds suspects galore, while Annie seems to hit a brick wall--until she reaches a breakthrough that spins her case in a shocking and surprising new direction, one that also involves Banks.

Then another incident occurs in the Maze which seems to link the two cases in a bizarre and mysterious way. As Banks and Annie dig into the past to uncover the deeper connections, they find themselves also dealing with the emotional baggage and personal demons of their own relationship. And it soon becomes clear that there are two killers in their midst, and that at any moment either one might strike again.