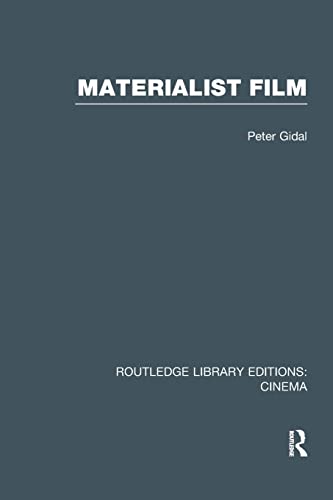 A polemical introduction to the avant-garde and experimental in film (including making and viewing), Materialist Film is a highly original, thought-provoking book.

Thirty-seven short chapters work through a series of concepts which will enable the reader to deal imaginatively with the contradictory issues produced by experimental film. Each concept is explored in conjunction with specific films by Andy Warhol, Malcolm LeGrice, Lis Rhodes, Jean-Luc Goddard, Rose Lowder, Kurt Kren, and others.

Peter Gidal draws on important politico-aesthetic writings, and uses some of his own previously published essays from Undercut, Screen, October, and Millennium Film Journal to undertake this concrete process of working through abstract concepts. Originally published in 1989.

NLS9781138995703
9781138995703
1138995703
Materialist Film by Peter Gidal
Peter Gidal
Routledge Library Editions: Cinema
New
Paperback
Taylor & Francis Ltd
2016-10-26
208
N/A
Book picture is for illustrative purposes only, actual binding, cover or edition may vary.
This is a new book - be the first to read this copy. With untouched pages and a perfect binding, your brand new copy is ready to be opened for the first time
Trustpilot