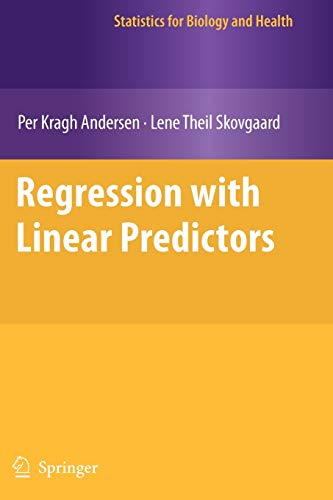 Regression with Linear Predictors by Per Kragh Andersen

This text provides a unified treatment of regression models for different outcome types, such as linear regression, logistic regression, and Cox regression. It includes many worked examples.

Regression with Linear Predictors by Per Kragh Andersen

This is a book about regression analysis, that is, the situation in statistics where the distribution of a response (or outcome) variable is related to - planatory variables (or covariates). This is an extremely common situation in the application of statistical methods in many ?elds, andlinear regression,- gistic regression, and Cox proportional hazards regression are frequently used for quantitative, binary, and survival time outcome variables, respectively. Several books on these topics have appeared and for that reason one may well ask why we embark on writing still another book on regression. We have two main reasons for doing this: 1. First, we want to highlightsimilaritiesamonglinear,logistic,proportional hazards,andotherregressionmodelsthatincludealinearpredictor. These modelsareoftentreatedentirelyseparatelyintextsinspiteofthefactthat alloperationsonthemodelsdealingwiththelinearpredictorareprecisely the same, including handling of categorical and quantitative covariates, testing for linearity and studying interactions. 2. Second, we want to emphasize that, for any type of outcome variable, multiple regression models are composed of simple building blocks that areaddedtogetherinthelinearpredictor:thatis,t-tests,one-wayanalyses of variance and simple linear regressions for quantitative outcomes, 2x2, 2x(k+1) tables and simple logistic regressions for binary outcomes, and 2-and (k+1)-sample logrank testsand simple Cox regressionsfor survival data. Thishastwoconsequences. Allthesesimpleandwellknownmethods can be considered as special cases of the regression models. On the other hand, the e?ect of a single explanatory variable in a multiple regression model can be interpreted in a way similar to that obtained in the simple analysis, however, now valid only for the other explanatory variables in the model "held ?xed".

"Specific orientation is emphasized as early as page 3 where three examples are discussed, one with a quantitative response, one with a binary response, and one with a survival time response. ... This book is extremely well written and the 171 excellent diagrams produced by Therese Graversen enhance it. ... In summary, this book is excellent and fully appropriate for the target audience." (Norman R. Draper, International Statistical Review, Vol. 79 (2), 2011)

"The monograph belongs to the series of Statistics for Biology and Health, and is written by the internationally recognized experts in applied statistics from the University of Copenhagen, Denmark. ... There are exercises in each chapter, where consideration is performed meticulously, giving ready-to-use tools for practical regression numerical modeling and analysis. ... The book is especially useful for researchers who apply regressions to solve practical problems and want to extract real meaning from the obtained models." (Stan Lipovetsky, Technometrics, Vol. 53 (3), August, 2011)

The authors are since 1978 affiliated with the Department of Biostatistics, University of Copenhagen. Per Kragh Andersen is professor; he is a co-author of the Springer book "Statistical Models Based on Counting Processes," and has served on editorial boards on several statistical journals. Lene Theil Skovgaard is associate professor; she has considerable experience as teacher and consultant, and has served on the editorial board of Biometrics.
Statistical models.- One categorical covariate.- One quantitative covariate.- Multiple regression, the linear predictor.- Model building: From purpose to conclusion.- Alternative outcome types and link functions.- Further topics.
NLS9781461426271
9781461426271
1461426278
Regression with Linear Predictors by Per Kragh Andersen
Per Kragh Andersen
Statistics for Biology and Health
New
Paperback
Springer-Verlag New York Inc.
2012-09-05
494
N/A
Book picture is for illustrative purposes only, actual binding, cover or edition may vary.
This is a new book - be the first to read this copy. With untouched pages and a perfect binding, your brand new copy is ready to be opened for the first time
Trustpilot