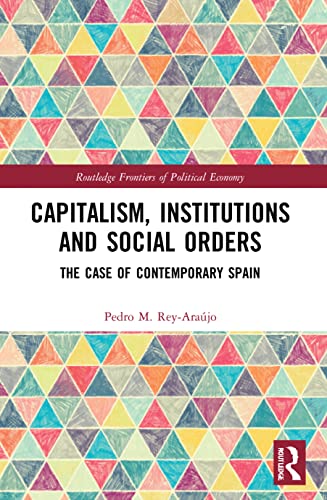 This book develops a novel political economy approach by establishing a dialogue between the Social Structures of Accumulation theory and Ernesto Laclau's post-Marxism theory. Using this synthesis, it provides an in-depth analysis of Spain's recent socio-economic evolution since the early-1990s.

Capitalism, Institutions and Social Orders develops a novel political economy approach by establishing a dialogue between the Social Structures of Accumulation (SSA) theory and Ernesto Laclau's post-Marxism theory. Using this synthesis, it provides an in-depth analysis of Spain's recent socio-economic evolution since the early 1990s.

The book develops a theoretical framework capable of appraising capitalist dynamics together with their relationship to the institutional environment surrounding and structuring them. This is in order to explore the interrelation between the historical development of the capitalist mode of production, on the one hand, and the various co-existing social processes, social consensuses and political identities, on the other. Contemporary Spain provides an interesting case study: until the onset of the Great Recession, Spain had an impressive macroeconomic record supported by several contradictory social processes, such as a massive real estate bubble, an upsurge in private indebtedness and a deteriorating manufacturing sector. However, the accumulation of internal imbalances during those years led inevitably to the sudden disintegration of this institutional and social environment in the years after 2008, thus resulting into a breakdown of capitalist activity accompanied by widespread social contestation. The book also explores the ensuing political scenario, including the emergence of the 'indignados' movement and the anti-austerity party Podemos.

This work is of significant interest to critical political economy and discourse-theory scholars, critical theorists in general, and social scientists concerned with the recent Spanish experience.

[T]he book is a key contribution on both the SSA and PDT scholarships as well as on the political economy of contemporary Spain. Rey-Araujo has written an excellent book which will influence future research in these fields. - Joan Miro, Capital & Class

[This book] rigorously vindicates a radical political economy of/for (re)conciliation between Marxism and post-structuralist discourse theory, in order to comprehend the frictional mechanisms of socioeconomic reproduction and sociopolitical interactions. This is a sensible theoretical framework for capturing the complexity of capitalist societies as actually existing formations which are institutionalized and embodied, just as the author shows through the case study of Spain's contemporary socio-economic evolution. Furthermore, it is also a proposal of great value to many other fields of study beyond the strictly economic, as well as to those political economy approaches that remain skeptical to the 'cultural turn' in critical social sciences. - Laura Martinez-Jimenez, Journal of Cultural Economy

[T]he author succeeds in providing a rich explanation of the recent evolution of the Spanish political economy...[and] does so brilliantly, with an original and a very well-designed theoretical framework. Additionally, he provides an easy-to-read but very well-substantiated account of the recent political and economic history of Spain, which is very welcome. - Luis Buendia, Review of Radical Political Economics

Pedro M. Rey-Araujo is a Researcher at the University of Santiago de Compostela, Spain.

NLS9780367567224
9780367567224
0367567229
Capitalism, Institutions and Social Orders: The Case of Contemporary Spain by Pedro M. Rey-Araujo
Pedro M. Rey-Araujo
Routledge Frontiers of Political Economy
New
Paperback
Taylor & Francis Ltd
2022-05-30
238
N/A
Book picture is for illustrative purposes only, actual binding, cover or edition may vary.
This is a new book - be the first to read this copy. With untouched pages and a perfect binding, your brand new copy is ready to be opened for the first time
Trustpilot