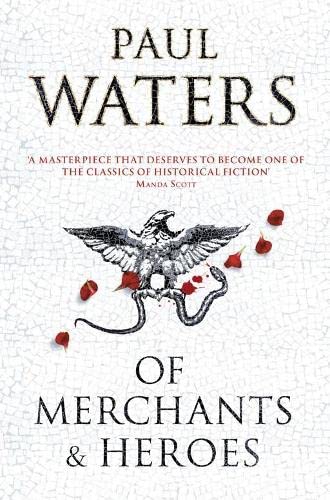 A consuming story of love, loss and redemption set in the classical world of Rome and Greece, Of Merchants & Heroes is the story of a young man's pursuit of his father's murderer and and of the values and qualities he develops that will make him a man . . . a man capable of a deep, noble and enduring love.

At the end of the third century BC, as Republican Rome's long war with Carthage was at last drawing to a close, it was already threatened by a new enemy, Philip, the tyrant king of Macedon in the east. Thus begins Rome's long involvement with Greek civilization, from which it is to learn so much . . . Into this turbulent world emerges our Roman hero, Marcus, whose father is brutally murdered by pirates on a journey from Italy to Corfu on a visit to his uncle. Fate takes him to some of the great cities of the Greco-Roman world at a time of major turbulence, where he learns much and finds love unexpectedly.

This is a remarkable, beautifully written debut that explores political and philosophical questions that are timeless - democracy and tyranny, war and self-defence, right and duty - as well as questions of love, loyalty and betrayal.

Paul Waters is a well-travelled classicist; though educated in Britain, he has lived much of his life abroad, including in Africa, America and Greece. His first novel, Of Merchants & Heroes, was published in 2008, followed by Cast Not the Day in 2009.
GOR000975170
9780330452670
0330452673
Of Merchants & Heroes by Paul Waters
Paul Waters
Used - Very Good
Paperback
Pan Macmillan
20080801
480
null null null null null null null null null null
Book picture is for illustrative purposes only, actual binding, cover or edition may vary.
This is a used book - there is no escaping the fact it has been read by someone else and it will show signs of wear and previous use. Overall we expect it to be in very good condition, but if you are not entirely satisfied please get in touch with us
Trustpilot