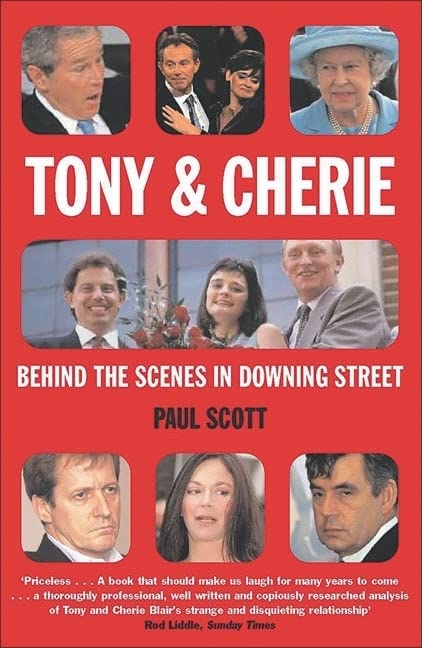 Tony and Cherie by Paul Scott

The book Downing Street doesn't want you to read: a funny, fascinating and compelling biography of Britain's First Couple.

Tony and Cherie: A Special Relationship by Paul Scott

Going behind the political spin to show the human reality of life in Downing Street for Tony and Cherie, this book draws on new information from well-placed sources to reveal how the Blairs reacted to major events like the deaths of Diana and the Queen Mother, 9/11, the war on Iraq, the suicide of David Kelly and the July bombings. We discover the truth about their strange relationship with 'lifestyle guru' Carole Caplin, who has embroiled them in controversy (including the devastating scandal dubbed Cheriegate). For the first time we see them navigating awkward visits to Balmoral, where Cherie is snubbed by Princess Anne and forced to participate in the Queen Mother's drunken tea party. We learn about their rapport with the Clintons, the horrors of socialising with the Bushes on their ranch in Texas - and the time Cherie was spied on in the shower by the Chinese government.

We also have insights into the backstabbing and rivalry within the Blair court, and the enmity with Gordon Brown and his camp. We see Cherie's influence behind the scenes, and her hopes of a political role - and the problems her position causes her. Funny and revealing, the book also shows how the First Couple (and New Labour) have been seduced by riches and glamour, creating an image for themselves that has come to entrap them.

Paul Scott is a recognised expert on Robbie Williams and Take That. His 2003 biography, Robbie Williams: Angels and Demons, was a Sunday Times bestseller and has been translated into eleven languages. He is a regular contributor to the Daily Mail.
GOR005418334
9780330440066
0330440063
Tony and Cherie: A Special Relationship by Paul Scott
Paul Scott
Used - Very Good
Paperback
Pan Macmillan
20060804
336
N/A
Book picture is for illustrative purposes only, actual binding, cover or edition may vary.
This is a used book - there is no escaping the fact it has been read by someone else and it will show signs of wear and previous use. Overall we expect it to be in very good condition, but if you are not entirely satisfied please get in touch with us
Trustpilot