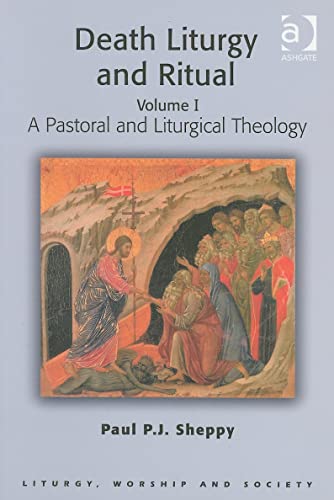 This title was first published in 2003: At the beginning of the twenty-first century, the Christian Church continues to minister to the dying and the bereaved. However, it does so in a rapidly changing world.

Death Liturgy and Ritual: Volume I: A Pastoral and Liturgical Theology by Paul P.J. Sheppy

This title was first published in 2003: Death Liturgy and Ritual is a two-volume study of Christian funerary theology and practice, presenting an invaluable account of funeral rites and the central issues involved for compilers and users. Paul Sheppy writes from direct experience of conducting funerals and of drafting liturgical resources for others. In Volume I: A Pastoral and Liturgical Theology, Sheppy argues that the Church ought to construct its theological agenda in dialogue with other fields of study. He proposes a Christian statement about death that finds its basis in the Paschal Mystery, since human death must be explained by reference to Jesus' death, descent to the dead, and resurrection. Using the three phases of van Gennep's theory of rites of passage, the author shows how the Easter triduum may be seen as normative for Christian liturgies of death. The companion volume, Volume II: A Commentary on Liturgical Texts, reviews a wide range of current Christian funeral rites and examines how they reflect both the Church's concern for the death and resurrection of Christ and the contemporary secular demand for funerals which celebrate the life of the deceased.

'With these volumes, Paul Sheppy has done a great service for all the churches.A By setting side-by-side many of the currently influential and currently used English-language texts for Christian liturgy at death, he helps us to see our common pastoral task much more clearly.A By setting out the communal process of death and by gently analyzing funeral texts according to their awareness of that process, he calls us to a stronger celebration of the death and resurrection of Jesus Christ as the context for all such liturgical ministry.A No other such resource exists, broad in its ecumenical reach, centered in its theological vision.' Gordon W. Lathrop, Charles A. Schieren Professor, Lutheran Theological Seminary at Philadelphia, USA 'Dr Sheppy's work most effectively fills a gap in the material available both for theological reflection and liturgical composition regarding Christian funeral rites.' Donald Gray CBE, Canon Emeritus of Westminster, UK 'We are fortunate to have two volumes devoted to a theological and pastoral examination of the Christian understanding of death and of the rites and rituals associated with it. These are two fine volumes, which commend themselves to anyone who seeks to broaden their knowledge and thinking on Christian death and funeral rites, and to address the difficult pastoral issues facing a Church called upon to celebrate Christian funeral liturgies in a secular society.' Society for Liturgical Study Reviews 'Paul Sheppy [...] is well qualified to write on the subject of death, liturgy, and ritual... Death Liturgy & Ritual comes in two volumes. In the first the author sets the context with which the contemporary pastor or priest will be only too familiar - ie that the majority of funerals which clergy are called upon to conduct, are for people who were, at most, nominal christians... In the second volume, Sheppy offers a commentary on selected current Christian funeral rites, and critiques them in the light of his thesis developed in the first volume.' Christianbookshops.org 'Anyone who in the foreseeable future sets out to undertake a theological study of death and the liturgical actions around it must not ignore Sheppy's work. ...There are rewards here for the pastor who seeks to explore how best the bereaved might be accompanied; for the minister who wishes to reflect on the meaning of those funerals which comprise such a significant part of their role in the church and in society; for the liturgist who wants to help the church in its funeral worship; and indeed, for anyone who wants to explore our mortality, the gospel, resurrection, and the church's calling to mourn with those who mourn.' Baptist Quarterly 'Delightful social comment and anecdote are mixed in with medical, legal and anthropological perspectives.' The Expository Times 'These volumes are specialist textbooks, but those whose duty it is to conduct funerals will find them very stimulating both pastorally and liturgically... What would be the benefits for someone investing in this two-volume work? There is the opportunity to see how relevant a Christian funeral is for those who seldom attend Church. It will help us assess how we incorporate the needs of everyone into the service. It will also help in our own understanding of bereavement issues.' Baptist times '... Paul Sheppy [...] has produced a two-volume health check of the Christian rite of passage.' Contact 'We need strong theology, good liturgy, and well-trained officiants who have good working relationships with funeral directors and managers of crematoriums. Paul Sheppy's work is an important contribution to all this.' Church Times

Paul P.J. Sheppy is a Fellow of the Centre for Baptist History and Heritage at Regent's Park College, University of Oxford and a Baptist minister in pastoral charge of a congregation in Reading, England. From 1987 to 2002 he was a member of the Joint Liturgical Group of Great Britain, serving as its Secretary from 1994. During the latter period, he was a member of the English Language Liturgical Consultation. He has been a member of the Churches' Funerals Group since 1997 and continues to serve as a Trustee of the Joint Liturgical Group. Paul Sheppy has written extensively on liturgical issues - in particular on liturgy and death. Most recently, his major review of Anglican funeral rites was published by the University of Tubingen in the encyclopaedic Im Angesicht des Todes. He is also the author of In Sure and Certain Hope, a collection of original liturgical resources for use at funerals.
Contents: Introduction; Ritual blunder; Medicine and the law; The end of life; Death in the community; The human in Christ; A passage from death to life; Past and present; Conclusion; Bibliography; Indexes.
GOR004922524
9780754605805
0754605809
Death Liturgy and Ritual: Volume I: A Pastoral and Liturgical Theology by Paul P.J. Sheppy
Paul P.J. Sheppy
Routledge Revivals
Used - Very Good
Paperback
Taylor & Francis Ltd
20031223
140
N/A
Book picture is for illustrative purposes only, actual binding, cover or edition may vary.
This is a used book - there is no escaping the fact it has been read by someone else and it will show signs of wear and previous use. Overall we expect it to be in very good condition, but if you are not entirely satisfied please get in touch with us
Trustpilot