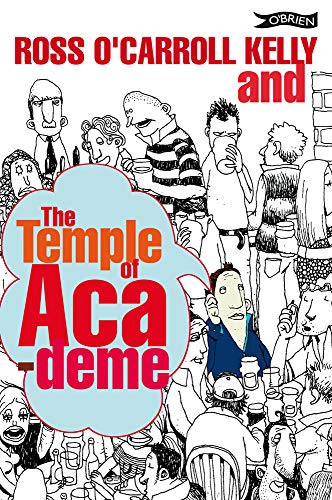 Ross O'Carroll-Kelly and the Temple of Academe by Paul Howard

The Miseducation Years and The Teenage Dirtbag Years, together in a single volume.

Ross O'Carroll-Kelly and the Temple of Academe by Paul Howard

The Miseducation Years and The Teenage Dirtbag Years, together in a single volume.

The Miseducation Years
So there I was, roysh, putting the 'in' in 'in crowd', hanging out, pick of the babes, bills from the old pair to fund the lifestyle I, like, totally deserve.

But being a schools rugby legend has its downsides, roysh, like all the total knobs wanting to chill in your, like, reflected glory, and the bunny-boilers who decide they want to be with me and won't take, like, no for an answer. And we're talking totally here. Basically, it may look like a champagne bath with, like, Nell McAndrew, with, like, no clothes and everything, but I can tell you, roysh, those focking bubbles can burst.

The Teenage Dirtbag Years
So there I was, roysh, class legend, schools rugby legend, basically all-round legend, when someone decides you can't, like, sit the Leaving Cert four times. Well that put a focking spanner in the works.

But joining the goys at college wasn't the mare I thought it would be, basically for, like, three major reasons: beer, women and more women. And for once I agree with Fionn about the, like, education possibilities. I mean, where else can you learn about Judge Judy, laminating fake IDs and, like, how to order a Ken and snog a girl at the same time?

I may be beautiful, roysh, but I'm not stupid and this much I totally know: college focking rocks.

Paul Howard helps Ross O'Carroll-Kelly to write his autobiographical series, largely because Ross can't really write, roysh? Find out more at rossocarrollkelly.com. He is also the author of the bestselling prison expose, The Joy, and co-author of Celtic Warrior, the autobiography of boxer Steve Collins. A former Sports Journalist of the Year, Paul covered the World Cup in Japan and Korea in 2002, and the rugby World Cup in Australia in 2003. His account of the Irish soccer squad and the notorious drama in Saipan, The Gaffers: Mick McCarthy, Roy Keane and the Team they Built, was a bestseller. Paul has also written several massively popular plays and has won the popular fiction prize at the Irish Book Awards three times for books in the Ross O'Carroll-Kelly series.
GOR002272094
9781847171368
1847171362
Ross O'Carroll-Kelly and the Temple of Academe by Paul Howard
Paul Howard
Used - Very Good
Paperback
O'Brien Press Ltd
2008-08-29
528
N/A
Book picture is for illustrative purposes only, actual binding, cover or edition may vary.
This is a used book - there is no escaping the fact it has been read by someone else and it will show signs of wear and previous use. Overall we expect it to be in very good condition, but if you are not entirely satisfied please get in touch with us
Trustpilot