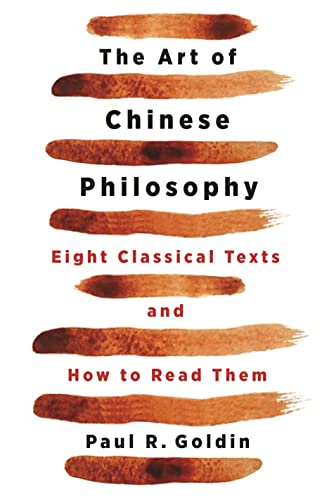 The Art of Chinese Philosophy by Paul Goldin

The Art of Chinese Philosophy: Eight Classical Texts and How to Read Them by Paul Goldin

A smart and accessible introduction to the most important works of ancient Chinese philosophy-the Analects of Confucius, Mozi, Mencius, Laozi, Zhuangzi, Sunzi, Xunzi, and Han Feizi

This book provides an unmatched introduction to eight of the most important works of classical Chinese philosophy-the Analects of Confucius, Mozi, Mencius, Laozi, Zhuangzi, Sunzi, Xunzi, and Han Feizi. Combining accessibility with the latest scholarship, Paul Goldin, one of the world's leading authorities on the history of Chinese philosophy, places these works in rich context as he explains the origin and meaning of their compelling ideas.

Because none of these classics was written in its current form by the author to whom it is attributed, the book begins by asking, "What are we reading?" and showing that understanding the textual history of the works enriches our appreciation of them. A chapter is devoted to each of the eight works, and the chapters are organized into three sections: "Philosophy of Heaven," which looks at how the Analects, Mozi, and Mencius discuss, often skeptically, Heaven (tian) as a source of philosophical values; "Philosophy of the Way," which addresses how Laozi, Zhuangzi, and Sunzi introduce the new concept of the Way (dao) to transcend the older paradigms; and "Two Titans at the End of an Age," which examines how Xunzi and Han Feizi adapt the best ideas of the earlier thinkers for a coming imperial age.

In addition, the book presents clear and insightful explanations of the protean and frequently misunderstood concept of qi-and of a crucial characteristic of Chinese philosophy, nondeductive reasoning. The result is an invaluable account of an endlessly fascinating and influential philosophical tradition.

"[The Art of Chinese Philosophy] is a book I'd wanted to find before: a lucid, but not simplifying, introduction to eight classic texts, full of lapidary poetry."---Hannah Sullivan, Times Literary Supplement
Paul R. Goldin is professor of East Asian languages and civilizations at the University of Pennsylvania and the author of many books, including Confucianism, After Confucius, and Rituals of the Way: The Philosophy of Xunzi.
NGR9780691200798
9780691200798
0691200793
The Art of Chinese Philosophy: Eight Classical Texts and How to Read Them by Paul Goldin
Paul Goldin
New
Paperback
Princeton University Press
2020-04-07
328
N/A
Book picture is for illustrative purposes only, actual binding, cover or edition may vary.
This is a new book - be the first to read this copy. With untouched pages and a perfect binding, your brand new copy is ready to be opened for the first time
Trustpilot