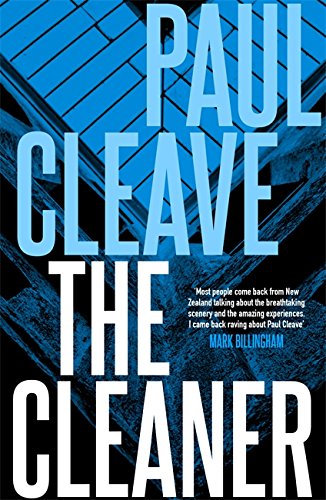 The Cleaner by Paul Cleave

Originally published in 2006 in Cleave's native New Zealand, where it was a finalist for the prestigious Ned Kelly Award for Best Fiction, The Cleaner is a chilling and darkly funny thriller that will leave you clamoring for his next.

The Cleaner by Paul Cleave

An international bestseller and one of the top-selling novels in New Zealand's history, Paul Cleave's dark thriller is a brilliant, bloody masterpiece.

Joe is in control of everything in his simple life - both his day job as a janitor for the police department and his "night work." He isn't bothered by the daily news reports of the Christchurch Carver, who, they say, has murdered seven women. Joe knows, though, that the Carver killed only six. He knows that for a fact, and he's determined to find the copycat. He'll punish him for the one, then frame him for the other six. It's the perfect plan because he already knows he can outwit the police.

All he needs now is to take care of all the women who keep getting in his way, including his odd, overprotective mother and Sally, the maintenance worker who sees him as a replacement for her dead brother. Then there's the mysterious Melissa, the only woman to have ever understood him, but whose fantasies of blackmail and torture don't have a place in Joe's investigation.

The literary equivalent of standing on the street beneath a skyscraper watching a disturbed soul teeter on a ledge, threatening to jump * Kirkus Reviews *
A damned good read * Crime Watch *
Praise for Paul Cleave * - *
Dark, bloody, and gripping ... classic noir fiction -- John Connolly on Blood Men
Paul Cleave writes the kind of dark, intense thrillers that I never want to end. Do yourself a favour and check him out -- Simon Kernick
Paul Cleave is an award-winning author who divides his time between his home city of Christchurch, New Zealand, where all his novels are set, and Europe, where none of his novels are set. His books have been translated into over a dozen languages and have sold over a million copies. He's won the Ngaio Marsh Award three times, the Saint-Maur book festival's crime novel of the year award, and has been shortlisted for the Edgar, the Barry and the Ned Kelly Awards. When he's not at home with the stereo cranked up loud and working on his next novel, he can normally be found on a tennis court, a golf course, or throwing a Frisbee somewhere.
GOR009605136
9781473664586
1473664586
The Cleaner by Paul Cleave
Paul Cleave
Used - Very Good
Paperback
Hodder & Stoughton
2018-05-17
400
N/A
Book picture is for illustrative purposes only, actual binding, cover or edition may vary.
This is a used book - there is no escaping the fact it has been read by someone else and it will show signs of wear and previous use. Overall we expect it to be in very good condition, but if you are not entirely satisfied please get in touch with us
Trustpilot