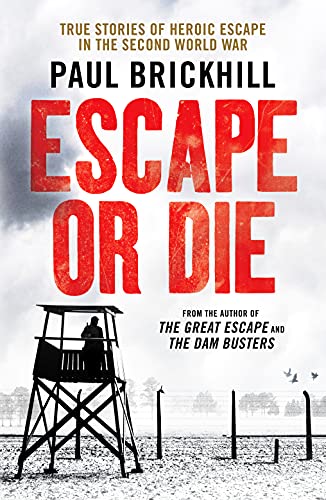 Escape or Die by Paul Brickhill

Escape or Die: True stories of heroic escape in the Second World War by Paul Brickhill

Here, from the bestselling author of The Great Escape, are eight true and startling escape stories from the Second World War.

The heroism of the servicemen who dared to defy their captors in this volume is matched only by that of the underground movements and ordinary civilians who helped the escapees in these stories of daring, invention and doggedness against the odds.

From the account of the Spitfire pilot left for dead by an execution squad in Sicily to the story of the air gunner forced to blag his way across the Baltic, every one is an unputdownable classic.

'As long as there are prisons men will try to escape from them; and as long as there is an RAF it will bring to the problems of escape the qualities of high resource, pure cussedness and that indefinable, damnably annoying refusal to lie down when dead, of which all the stories in this book are such excellent - and, I think, such exciting - examples.' H.E. Bates

Paul Brickhill was an Allied fighter pilot, prisoner of war, and author who wrote The Great Escape, The Dam Busters and Reach for the Sky.
GOR011597420
9781800324800
1800324804
Escape or Die: True stories of heroic escape in the Second World War by Paul Brickhill
Paul Brickhill
Used - Very Good
Paperback
Canelo
20210805
304
N/A
Book picture is for illustrative purposes only, actual binding, cover or edition may vary.
This is a used book - there is no escaping the fact it has been read by someone else and it will show signs of wear and previous use. Overall we expect it to be in very good condition, but if you are not entirely satisfied please get in touch with us
Trustpilot