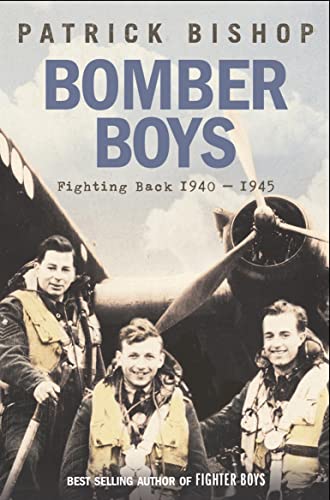 Patrick Bishop looks at the lives and the extraordinary risks that the painfully young pilots of Bomber Command took during the air-offensive against Germany from 1940-1945. As featured on the BBC 1 documentary BOMBER BOYS, presented by Ewan McGregor.

Patrick Bishop looks at the lives and the extraordinary risks that the painfully young pilots of Bomber Command took during the air-offensive against Germany from 1940-1945. As featured on the BBC 1 documentary BOMBER BOYS, presented by Ewan McGregor.

They came from every corner of Britain and its Empire. They were the best of their generation...heading for one of the worst tasks of WWII.

Like RAF pilots, the thousands of brave young men who joined Bomber Command took to the air to help Britain triumph in World War Two. But in the glow of victory, the fighter pilots were lauded for their efforts while the Bomber Boys faded in national memory. Crucial in the heat of combat, they were politically awkward afterwards.

Yet with an average life expectancy shorter than that of soldiers on the Western front in WWI, these men faced death, injury and capture time and again to send bombs through the shrieking flak onto enemy territory. `Bomber Boys' is a tribute to their strength, courage and heroism - filling in the historical blanks and immortalising their memory.

`A deeply humane, lucidly written and powerful tribute to some of the unsung heroes of the Second World War.' Michael Burleigh, Sunday Times

`Superbly written and authoritative...the members of Bomber Command now have a fitting commemoration of their heroic deeds.' Observer

`This is the best kind of military history - the kind in which the author never loses sight of the impact of war on its victims, German as well as British, and those who were left behind. "Bomber Boys" will remind the survivors that they and their lost comrades are not forgotten. And it reminds the rest of us what their war was all about.' Daniel Johnson, Evening Standard

`This is a terrific book, so riveting, exciting and moving that it must help bring back the Bomber Boys to their rightful place of honour. A true war memorial.' Montagu Curzon, Spectator

`A compelling account of life in RAF Bomber Command.' Telegraph

Patrick Bishop is a senior correspondent for the Daily Telegraph and author of `The Irish Empire'; with Eamonn Mallie, the acclaimed book `The Provisional IRA', and the bestselling `Fighter Boys'.

GOR000482570
9780007192151
0007192150
Bomber Boys: Fighting Back 1940-1945 by Patrick Bishop
Patrick Bishop
Used - Very Good
Paperback
HarperCollins Publishers
2008-03-03
400
N/A
Book picture is for illustrative purposes only, actual binding, cover or edition may vary.
This is a used book - there is no escaping the fact it has been read by someone else and it will show signs of wear and previous use. Overall we expect it to be in very good condition, but if you are not entirely satisfied please get in touch with us
Trustpilot