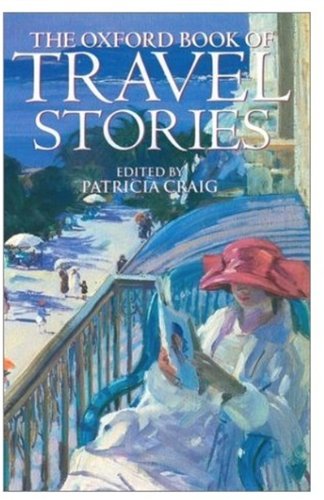 The Oxford Book of Travel Stories by Patricia Craig

This collection brings together the work of writers as diverse as Anthony Trollope, Edith Wharton and William Trevor. Some of the writers describe the journey itself and encounters on boat or train, while others see travel as a literal rite of passage, an escape or a sudden growing-up.

The Oxford Book of Travel Stories by Patricia Craig

Travel, associated as it is with strangeness, marvels, and excitement, has always proved an irresistible subject for writers. The Oxford Book of Travel Stories brings together some of the best short fiction on this most exhilarating of subjects from writers as diverse as Anthony Trollope, Edith Wharton, Ring Lardner, William Trevor, Sylvia Townsend Warner, John Cheever, Beryl Bainbridge and V.S. Pritchett. Readers of this anthology will be able to revel in the atmosphere of 19th-century Palestine, the Riviera of the 1920s, or a botanical tour of Greece. There are stories set in far distant locations - China, Australia - and others closer to home, such as Benedict Kiely's entrancing `A Journey to the Seven Streams'. Most are high-spirited, in keeping with the theme, some are wonderfully funny and one or two productively unsettling, such as Flannery O'Connor's `A Good Man is Hard to Find'. Some deal with the journey itself, and encounters on train or boat; others see travel as a literal rite of passage, an escape or a sudden growing-up. All of them illustrate, in various ways, how travel has to do with stimulus, enrichment and a sense of achievement - `Not fare well,' as T.S. Elliot has it, `But fare forward, voyagers'. This book is intended for readers of 19th and 20th century fiction, anthology-buyers, anyone interested in travel writing/literature, holidaymakers.
About the Editor
A freelance writer and reviewer, Patricia Craig has edited The Oxford Book of English Detective Stories, The Oxford Book of Schooldays, and The Oxford Book of Modern Women's Stories.
GOR004263802
9780192142535
0192142534
The Oxford Book of Travel Stories by Patricia Craig
Patricia Craig
Used - Very Good
Hardback
Oxford University Press
1996-05-23
458
N/A
Book picture is for illustrative purposes only, actual binding, cover or edition may vary.
This is a used book - there is no escaping the fact it has been read by someone else and it will show signs of wear and previous use. Overall we expect it to be in very good condition, but if you are not entirely satisfied please get in touch with us
Trustpilot