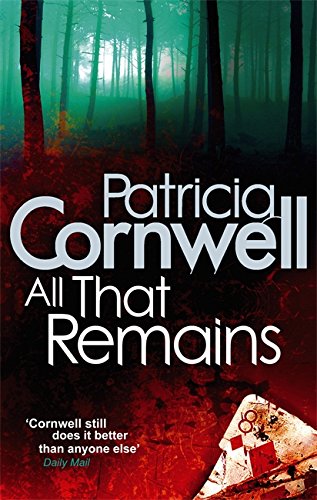 All That Remains by Patricia Cornwell

The third novel in the best-selling Dr Kay Scarpetta series

All That Remains by Patricia Cornwell

The third book in the Kay Scarpetta series, from No. 1 bestselling author Patricia Cornwell.

'America's most chilling writer of crime fiction' The Times

A killer is stalking young lovers. Taking their lives . . . and leaving just one tantalising clue . . .

When the bodies of young courting couples start turning up in remote woodlands areas, Dr Kay Scarpetta's task as Chief Medical Examiner is made more difficult by the effects of the elements. Eight times she must write that the cause of death is undetermined.

But when the latest girl goes missing turns out to be the daughter of one of the most powerful women in America, Kay finds herself prey to political pressure and press harassment. As she starts to investigate, she finds that vital evidence is being withheld from her - or even faked. And all the time a cunning, sadistic killer is still at large . . .

Patricia Cornwell's first crime novel, Postmortem, was published in 1990 and became the first novel to win all the major crime awards in a single year. In 2008 Cornwell won the Galaxy British Book Awards' Books Direct Crime Thriller of the Year - the first American ever to win this award. In 2011 she was awarded the Medal of Chevalier of the Order of Arts and Letters.

Often interviewed on US national television as a forensic consultant, Cornwell is a founder of the Virginia Institute of Forensic Science and Medicine; a founding member of the National Forensic Academy; a member of the Advisory Board for the Forensic Sciences Training Program at the Office of the Chief Medical Examiner, NYC and a member of the Harvard-affiliated McLean Hospital's National Council, where she is an advocate for psychiatric research.

Fox have acquired the film rights to the Scarpetta novels, featuring Angelina Jolie as Dr Kay Scarpetta. Cornwell's books are translated into thirty-six languages across more than fifty countries, and she is regarded as one of the major international bestselling authors.

GOR002399335
9780751544480
0751544485
All That Remains by Patricia Cornwell
Patricia Cornwell
Kay Scarpetta
Used - Very Good
Paperback
Little, Brown Book Group
2010-09-02
416
N/A
Book picture is for illustrative purposes only, actual binding, cover or edition may vary.
This is a used book - there is no escaping the fact it has been read by someone else and it will show signs of wear and previous use. Overall we expect it to be in very good condition, but if you are not entirely satisfied please get in touch with us
Trustpilot