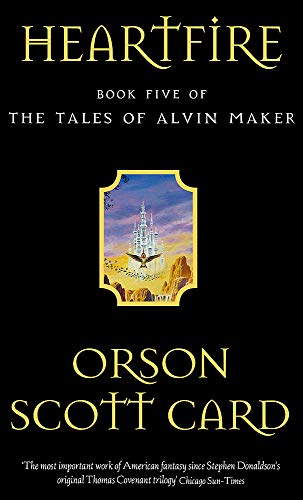 Book Five of The Tales of Alvin Maker.

'Card is one of the most important writers in the field.' - Ben Bova

Peggy is a Torch, able to see the fire burning in each person's heart. She can follow the paths of each person's future, and know each person's most intimate secrets. From the moment of Alvin Maker's birth, when the Unmaker first strove to kill him, she has protected him.

Now they are married, and Peggy is a part of Alvin's heart as well as his life. But Alvin's destiny has taken them on separate journeys. Alvin has gone north into New England, where knacks are considered witchcraft, and their use is punished by death. Peggy has been drawn south, to the British Crown Colonies and the court of King Arthur Stuart in exile. For she has seen a terrible future bloom in the heartfires of every person in America, a future of war and destruction.

One slender path exists that leads through the bloodshed, and it is Peggy's quest to set the world on that path to peace.

Some of the most hauntingly brilliant writing of the decade -- INTERZONE
Card has taken the venerable SF concepts of a superhuman and interstellar war . . . and, with superb characterisation, pacing and language, combined them into a seamless story of compelling power -- BOOKLIST
Hugo and Nebula-award winner Orson Scott Card demonstrates again that he belongs in the company of such older masters of science fiction as Isaac Asimov, Frank Herbert and Ursula K. Le Guin. -- MAGILL BOOK REVIEWS
The best writer science fiction has to offer. -- THE HOUSTON POST
The most important work of American fantasy since Stephen Donaldson's original Thomas Covenant trilogy. * CHICAGO SUNTIMES *
History, legend, magic, dreams: Card stirs them into a rich brew with a remarkably authentic flavour * LOCUS *
Orson Scott Card is the award-winning author of the Ender saga, the Alvin Maker series and the Homecoming series. He lives with his wife and three children in the US.
GOR001610255
9781841490328
1841490326
Heartfire: Tales of Alvin Maker: Book 5 by Orson Scott Card
Orson Scott Card
Tales of Alvin Maker
Used - Very Good
Paperback
Little, Brown Book Group
2001-04-05
352
N/A
Book picture is for illustrative purposes only, actual binding, cover or edition may vary.
This is a used book - there is no escaping the fact it has been read by someone else and it will show signs of wear and previous use. Overall we expect it to be in very good condition, but if you are not entirely satisfied please get in touch with us
Trustpilot