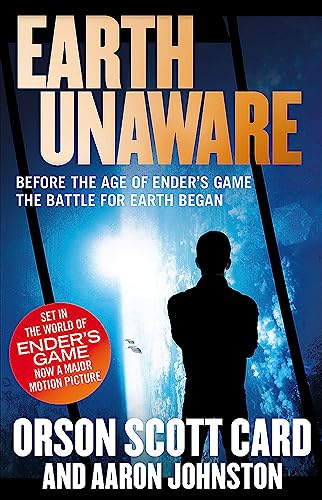 'The story progresses nimbly, with plenty of tension and excitement and Card's usual well-developed characters' - KIRKUS REVIEWS on EARTH UNAWARE

HUMANS THOUGHT THEY WERE ALONE IN THE GALAXY. UNTIL NOW.

A hundred years before Ender's Game, humanity is slowly making its way out to the planets of the solar system, exploring and mining asteroids.

The ship El Cavador is far from Earth, in the deeps of the Kuiper Belt, beyond Pluto. When the ship's telescopes pick up a fast-moving object coming in-system, they're unsure what to make of it.

Little do they know that this object is the most important thing to happen to the human race in a million years. It's humanity's first contact with an alien race. The First Formic War is about to begin.

Orson Scott Card is the international bestselling and award-winning author of the science fiction classic novel ENDER'S GAME, the Ender saga, the Alvin Maker series and the Homecoming series.

GOR011110583
9780356502748
0356502740
Earth Unaware: Book 1 of the First Formic War by Orson Scott Card
Orson Scott Card
First Formic War
Used - Like New
Paperback
Little, Brown Book Group
2013-06-04
416
N/A
Book picture is for illustrative purposes only, actual binding, cover or edition may vary.
The book has been read, but looks new. The book cover has no visible wear, and the dust jacket is included if applicable. No missing or damaged pages, no tears, possible very minimal creasing, no underlining or highlighting of text, and no writing in the margins
Trustpilot