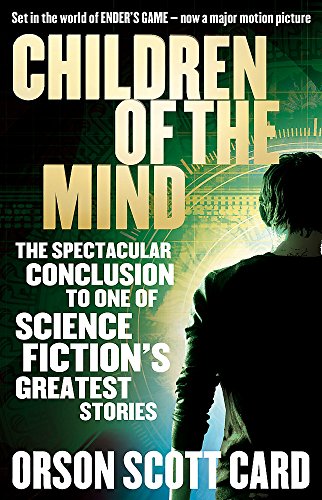 Children Of The Mind by Orson Scott Card

Children Of The Mind: Book 4 of the Ender Saga by Orson Scott Card

Achieves and delivers more than almost anything else within the science fiction genre, Ender's Game is a contemporary classic - New York Times

'Card's prose is powerful here, as is his consideration of mystical and quasi-religious themes. Though billed as the final Ender novel, this story leaves enough mysteries unexplored to justify another entry; and Card fans should find that possibility, like this novel, very welcome indeed.' - Publishers Weekly (starred review) on Children of the Mind

The planet Lusitania is home to three sentient species: the Pequeninos; a large colony of humans; and the Hive Queen, brought there by Ender. But once again the human race has grown fearful; the Starways Congress has gathered a fleet to destroy Lusitania.

Jane, the evolved computer intelligence, can save the three sentient races of Lusitania. She has learned how to move ships outside the universe, and then instantly back to a different world, abolishing the light-speed limit. But it takes all the processing power available to her, and the Starways Congress is shutting down the Net, world by world. Soon Jane will not be able to move the ships. Ender's children must save her if they are to save themselves.

The dazzling Ender series, which has changed the face of science fiction, concludes.

Some of the most hauntingly brilliant writing of the decade -- INTERZONE on ENDER'S GAME
Achieves and delivers more than almost anything else within the science fiction genre, Ender's Game is a contemporary classic -- NEW YORK TIMES on ENDER'S GAME
Card has taken the venerable SF concepts of a superhuman and interstellar war . . . and, with superb characterisation, pacing and language, combined them into a seamless story of compelling power -- BOOKLIST on ENDER'S GAME
Hugo and Nebula-award winner Orson Scott Card demonstrates again that he belongs in the company of such older masters of science fiction as Isaac Asimov, Frank Herbert and Ursula K. Le Guin. -- MAGILL BOOK REVIEWS
The best writer science fiction has to offer. -- THE HOUSTON POST
Orson Scott Card is the award-winning author of the Ender saga, the Alvin Maker series and the Homecoming series. He lives with his wife and children in the US.
GOR005346082
9780356501871
0356501876
Children Of The Mind: Book 4 of the Ender Saga by Orson Scott Card
Orson Scott Card
Ender Saga
Used - Very Good
Paperback
Little, Brown Book Group
2013-05-02
368
N/A
Book picture is for illustrative purposes only, actual binding, cover or edition may vary.
This is a used book - there is no escaping the fact it has been read by someone else and it will show signs of wear and previous use. Overall we expect it to be in very good condition, but if you are not entirely satisfied please get in touch with us
Trustpilot