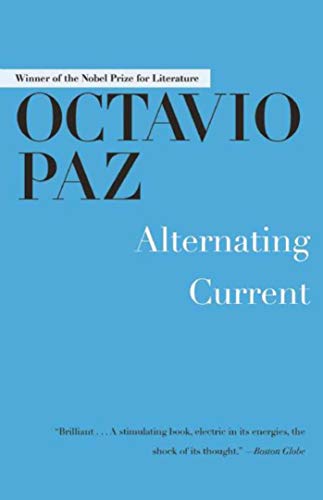 In its front-page review of Alternating Current, The New York Times Book Review called Octavio Paz "an intellectual literary one-man band" for his ability to write incisively and with dazzling originality about a wide range of subjects. This collection of his essays is divided into three parts. Part 1 sets forth his credo as an artist and poet, steeped in his knowledge of world literature and Mexican art and history and buttressed by readings of writers from Mexican poet Luis Cernuda to D. H. Lawrence, Malcolm Lowry, Andre Breton, and Carlos Fuentes. Part 2 deals with themes such as Western individualism versus plurality and flux in Eastern philosophy, atheism versus belief, nihilism, liberated man, and versions of paradise. In Part 3, Paz writes of politics and ethics in essays on revolt and revolution, existentialism, Marxism, the third world, and the new face of Latin America.

A scintillating thinker and a prescient voice on emerging world culture, Paz reveals himself here as "a man of electrical passions, paradoxical visions, alternating currents of thoughts, and feeling that runs hot but never cold" (Christian Science Monitor).

"Brilliant . . . A stimulating book, electric in its energies, the shock of its thought."--Boston Globe

"Reads like a poet's prose: quick, flashing, and idiosyncratic. . . . [His essays] do not close discussions so much as open them."--The New Yorker

"Paz is by vocation a believer in alternatives, in new ways in which tradition and change can nourish each other. In his special detachment, he can afford to regard the past with love, the future without panic." --Time

"With the translation of Alternating Current, readers . . . can make the acquaintance of a man of electrical passions, paradoxical visions, alternating currents of thoughts, and feeling that runs hot but never cold"--Christian Science Monitor

Octavio Paz was born in 1914 in Mexico City. A poet, writer, thinker, and diplomat, he was the author of many volumes of poetry as well as literary and art criticism and works on politics, culture, and Mexican history. Winner of the Nobel Prize for Literature in 1990, he was also awarded the Jerusalem Prize, the Cervantes Prize, the Neustadt International Prize for Literature, and the German Peace Prize. He died in 1998.
GOR010906891
9781628725315
1628725311
Alternating Current by Octavio Paz
Octavio Paz
Used - Very Good
Paperback
Skyhorse Publishing
2015-07-23
224
N/A
Book picture is for illustrative purposes only, actual binding, cover or edition may vary.
This is a used book - there is no escaping the fact it has been read by someone else and it will show signs of wear and previous use. Overall we expect it to be in very good condition, but if you are not entirely satisfied please get in touch with us
Trustpilot