The Established and the Outsiders Norbert Elias 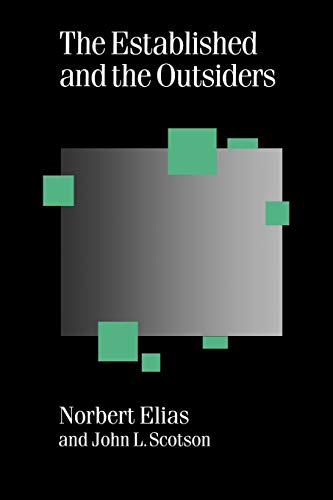 The Established and the Outsiders by Norbert Elias

A local community study of tense relations between an established group and outsiders becomes a microcosm that illuminates a range of sociological configurations. The Established and the Outsiders examines the mechanisms of stigmatization, monopolization of power, collective fantasy and `we' and `they' images which support and reinforce divisions in society.

The Established and the Outsiders by Norbert Elias

The Established and the Outsiders is a classic text from one of the major figures of world sociology. This new edition includes a theoretical introduction, published in English for the first time.

In Norbert Elias's hands, a local community study of tense relations between an established group and outsiders - with no other discernible difference between them - becomes a microcosm that illuminates a wide range of sociological configurations including racial, ethnic, class and gender relations. The book examines the mechanisms of stigmatisation, taboo and gossip, monopolisation of power, collective fantasy and 'we' and 'they' images which support and reinforce divisions in society. Developing aspects of Elias's thinking that relate his work to current sociological concerns, it presents the fullest elaboration of his concepts of mutual identification and functional democratisation.

The Established and the Outsiders not only brings out the important theoretical implications of micro-analysis but also demonstrates the significance of such detailed study analysis for better sociological theory. It is essential reading for students and scholars in social theory, sociology and anthropology.
The Established and the Outsiders, is a reissue of a study carried out in the 1950s, while Elias was employed in the department of sociology at the University of Leicester. It is safe to say that it has been rescued from obscurity as part of the collective effort to publish as much of Elias's oeuvre as possible.... [The book] is worth reading today primarily for the light it sheds on Elias's intellectual development. Those interested in this aspect can read the introductory chapter, which was written by Elias ten years after the original date of publication for the Dutch edition. Here, Elias uncovers what he considers a universal human theme in the small community of Winston Parva on the outskirts of Leicester.... This particular case study is itself interesting in that these established and outsiders are formed out of the same social class, the working class of the British Midlands, on the basis of neighbourhood and life-style, not relation to the means of production or ethnic or racial differences. As in all his work, Elias uncovers here structural regularities which underlie historical variations in human behaviour.... Norbert Elias and his ardent followers have done sociology a great service in publishing [the book] which help[s] keep alive his interest in the long-term processes of social change. The civilizing process will remain a powerful research program for an historical sociology... capable of generating interesting case studies like The Established and the Outsiders. -- Acta Sociologica

The Established and the Outsiders was first published in 1965. It grew out of a study of a community near Leicester in the late 1950s and early 1960s by John Scotson, a local schoolteacher interested in juvenile delinquency. But in the hands of Norbert Elias, one of the century's great sociologists, this local study was reworked to illuminate social processes of general significance in human society generally - including how a group of people can monopolise power chances and use them to exclude and stigmatise members of another very similar group (for example through the poweful medium of gossip), and how that is experienced in the collective `we-images' of both groups. Ten years later Elias dictated, in English, a long new introduction for the Dutch translation of the book. This 'Theoretcial Essay on Established and Outsiders' spelled out how the theory could be applied to a whole range of changing patterns of human inequality: to relations between classes, ethnic groups, colonised and colonisers, men and women, parents and children, gays and straights. For many years it was thought that parts of the English text of this important essay had been lost, but they came to light in 1994 after Elias's death in 1990, and the essay is now published in English for the first time in this volume.

-- Stephen Mennell
Introduction - Norbert Elias A Theoretical Essay on the Established and the Outsiders Preface Considerations of Procedure Neighbourhood Relations in the Making Overall Picture of Zone 1 and Zone 2 The Mother-Centred Families of Zone 2 Local Associations and the 'Old Families' Network' Overall Picture of Zone 3 Observations on Gossip Young People in Winston Parva Conclusion
GOR004652541
9780803979499
0803979495
The Established and the Outsiders by Norbert Elias
Norbert Elias
Published in association with Theory, Culture & Society
Used - Very Good
Paperback
SAGE Publications Ltd
1994-11-22
240
N/A
Book picture is for illustrative purposes only, actual binding, cover or edition may vary.
This is a used book - there is no escaping the fact it has been read by someone else and it will show signs of wear and previous use. Overall we expect it to be in very good condition, but if you are not entirely satisfied please get in touch with us
Trustpilot