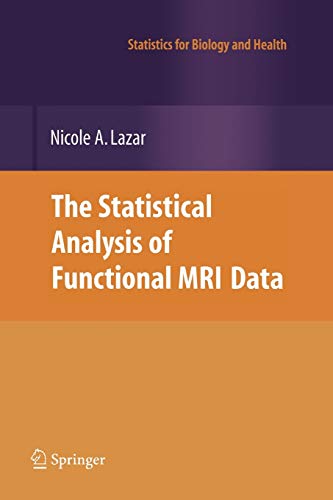 The Statistical Analysis of Functional MRI Data by Nicole Lazar

In the pages of mainstream publications, including The New York Times and Wired, readers can learn about cutting-edge research into topics such as understanding how customers react to products and - vertisements ("If your brain has a 'buy button,' what pushes it?", The New York Times,October19,2004),howviewersrespondtocampaignads("Using M.

The Statistical Analysis of Functional MRI Data by Nicole Lazar

The study of brain function is one of the most fascinating pursuits of m- ern science. Functional neuroimaging is an important component of much of the current research in cognitive, clinical, and social psychology. The exci- ment of studying the brain is recognized in both the popular press and the scienti?c community. In the pages of mainstream publications, including The New York Times and Wired, readers can learn about cutting-edge research into topics such as understanding how customers react to products and - vertisements ("If your brain has a 'buy button,' what pushes it?", The New York Times,October19,2004),howviewersrespondtocampaignads("Using M. R. I. 's to see politics on the brain," The New York Times, April 20, 2004; "This is your brain on Hillary: Political neuroscience hits new low," Wired, November 12,2007),howmen and womenreactto sexualstimulation ("Brain scans arouse researchers,"Wired, April 19, 2004), distinguishing lies from the truth ("Duped," The New Yorker, July 2, 2007; "Woman convicted of child abuse hopes fMRI can prove her innocence," Wired, November 5, 2007), and even what separates "cool" people from "nerds" ("If you secretly like Michael Bolton, we'll know," Wired, October 2004). Reports on pathologies such as autism, in which neuroimaging plays a large role, are also common (for - stance, a Time magazine cover story from May 6, 2002, entitled "Inside the world of autism").

"This book gives an extensive description of many analysis pathways developed recently in fMRI data processing. The varied topics are described firstly in a very comprehensible fashion for non-statisticians. In addition, most of the explanations are supported by clear and accurate statistical justifications. Thus, statisticians will find in this book the scientific issues which readers are facing when analyzing fMRI data, and neuroscientists will find a summary of many different methods to tackle fMRI data exploration.... It is highly appreciated to be able to read such honest and thoughtful reflections of fMRI data analysis." (Archard, Journal of Statistical Software, January 2009, Vol. 29, Book Review 3).

"...I recommend this book. It serves as an overview of current statistics-related research in a field that is advancing rapidly and is both scientifically and technologically very complex, thereby filling a need that had not yet been met by any other book. The author cites widely from both statistical and neuroimaging literature (284 references total)... . The author states that her goal for this book was 'to provide an introduction to functional magenetic resonance imaging, aimed at statisticians, that would highlight the important scientific issues and survey the common...analysis pathways' (p. VIII). The author has in large part done a very commendable job of attaining this goal." ( Journal of the American Statistical Association, Dec. 2009, Vol. 104, No. 488)