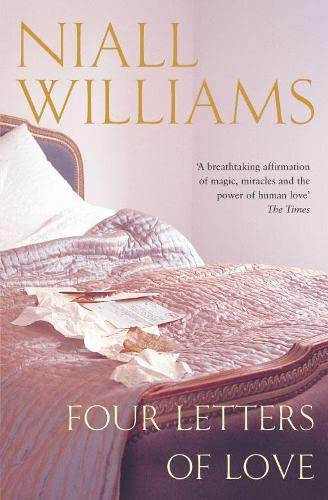 'When I was twelve years old God spoke to my father for the first time. God didn't say much. He told my father to be a painter and left it at that . . . ' So begins Niall Williams' magical tale about love and destiny.

Nicholas Coughlan and Isabel Gore were made for each other -- but fate doesn't always take the easiest or the most obvious route to true love. For a start, Nicholas and Isabel have never met and nor are they likely to, without some kind of divine intervention. But as God, ghosts, a series of coincidences and seemingly chance events and encounters conspire to bring the couple together, other -- often more human -- forces attempt to keep them apart. 'What will be, will be,' of course, but that doesn't guarantee a happy-ever-after ending, nor answer the question 'Will they, won't they?'

Written in a lyrical, lilting tone, Four Letters of Love is a glorious, uplifting story about faith, about seizing the moment, believing in your instincts and acting on impulse -- and about following your heart, no matter where it may lead.

Niall Williams was born in 1958 and lives in Kiltumper, Ireland, with his wife Christine and their two children. He is the author of several novels, including Four Letters of Love, which was sold in over twenty countries and is an international bestseller.
GOR000470767
9780330352697
0330352695
Four Letters Of Love by Niall Williams
Niall Williams
Used - Very Good
Paperback
Pan Macmillan
1998-04-11
352
N/A
Book picture is for illustrative purposes only, actual binding, cover or edition may vary.
This is a used book - there is no escaping the fact it has been read by someone else and it will show signs of wear and previous use. Overall we expect it to be in very good condition, but if you are not entirely satisfied please get in touch with us
Trustpilot