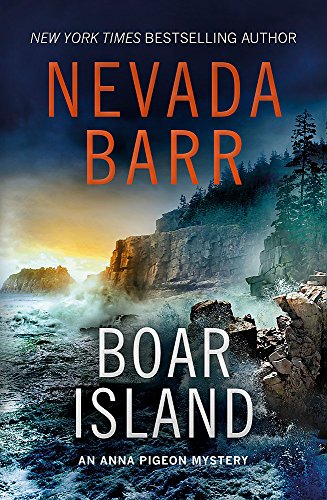 The nineteenth Anna Pigeon mystery is a gripping novel that transports you to the wild and dangerous landscape of Acadia National Park and is sure to appeal to fans of Sue Grafton and Janet Evanovich.

Anna Pigeon, in her career as a National Park Service Ranger, has had to deal with all manner of crimes and misdemeanours, but cyber-bullying and stalking is a new one. The target is Elizabeth, the adopted teenage daughter of her friend Heath Jarrod. Elizabeth is driven to despair by the disgusting rumours spreading online and bullying texts. Until, one day, Heath finds her daughter Elizabeth in the midst of an unsuccessful suicide attempt. And then she calls in the cavalry - her aunt Gwen and her friend Anna Pigeon.

The three adults decide the best thing to do is to remove Elizabeth from the situation and, since Anna is about to start her new post as Acting Chief Ranger at Acadia National Park in Maine, they join her and stay at a house on the cliff of a small island near the park, Boar Island.

But the move doesn't solve the problem. The stalker has followed them. And Heath (a paraplegic) and Elizabeth aren't alone on the otherwise deserted island. At the same time, Anna has barely arrived at Acadia before a brutal murder is committed by a killer uncomfortably close to her.

A wonderful, satisfying read - Washington PostNevada Barr writes with a cool, steady hand about the violence of nature and the cruelty of man - New York Times Book ReviewHaunting . . . Wonderful . . . Vivid and memorable . . . A book that is just about perfect - Denver PostA real find . . . Kept me reading far into the nightA delight . . . A scorching, baffling tale . . . It almost singes you as you turn the pages - Detroit Free PressOne scary book . . . Intense - Orlando SentinelGripping . . . Harrowing . . . Brilliantly executed - Washington PostThrilling . . . Remarkable - New York Times Book Review
Nevada Barr is an award-winning novelist and New York Times bestselling author. She began her career as an actress, during which time she became interested in the environmental movement and started working in the National Parks during the summers - Isle Royale in Michigan, Guadalupe Mountains in Texas, Mesa Verde in Colorado, and then on the Natchez Trace Parkway in Mississippi. Nevada Barr has written a series of mysteries featuring park ranger Anna Pigeon as well as numerous other books, short stories and articles. She currently resides in New Orleans.
GOR007603186
9781472202291
1472202295
Boar Island (Anna Pigeon Mysteries, Book 19): A suspenseful mystery of the American wilderness by Nevada Barr
Nevada Barr
Anna Pigeon Mysteries
Used - Very Good
Paperback
Headline Publishing Group
2016-05-17
384
N/A
Book picture is for illustrative purposes only, actual binding, cover or edition may vary.
This is a used book - there is no escaping the fact it has been read by someone else and it will show signs of wear and previous use. Overall we expect it to be in very good condition, but if you are not entirely satisfied please get in touch with us
Trustpilot