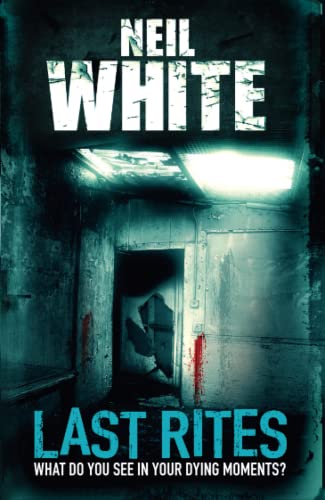 What do you see in your dying moments...?

A young woman is on the run, her boyfriend found brutally slain in their bed. A simple crime of passion. Or is it?

Find out in the new heart-stopping thriller from the acclaimed author of LOST SOULS.

What do you see in your dying moments...?

A young woman is on the run, her boyfriend found brutally slain in their bed. A simple crime of passion. Or is it?

Find out in the new heart-stopping thriller from the acclaimed author of LOST SOULS.

The Lancashire town of Blackley has been rocked by the violent death of Luke Howarth. The fingers of suspicion point towards his girlfriend, Sarah Goode - missing since his murder. Just another crime of passion with a tragic end.

Or is it? Reporter Jack Garrett isn't so sure - especially when he's asked by Sarah's distraught parents to find their daughter. Their description of caring schoolteacher Sarah doesn't tally with the media's portrayal of a cold-blooded killer.

But as he hunts for Sarah, Jack finds himself immersed in the town's troubled history and discovers that dangerous rituals from the past are impacting on the present.

Jack's girlfriend, DC Laura McGanity, in the midst of a tough custody battle, must be content to sit on the sidelines. But she soon finds herself caught up in the investigation, as the mystery surrounding Sarah's disappearance dramatically unravels.

Jack and Laura find themselves in mortal danger as they come face to face with an unhinged killer who is determined that they will pay with their lives...

`Fallen Idols has been hailed as a stunning debut'.
The Blackpool Gazette

`Fallen Idols...has all the hallmarks of a great read for crime-thriller fans with celebrity killings, conspiracies, revenge and even a hint of romance'.
The Weekly News

'... a whirlwind of a novel...a serious contender to match the giants of the crime fiction world'
Crimesquad.com

`Superbly paced, with firmly grounded dialogue and a believeable cast of characters, this subtle page-turner lingers long in the mind.
Lancashire Evening Post

`Neil White is taking the crime thriller market by storm. Last Rites teems with menace, and the action builds to a terrific climax.'
Lancashire Evening Post

`Enough originality and suspense to make this a good read.'
South Wales Argus

Born above a shoe shop in the mid-1960s, Neil spent most of his childhood in Wakefield in West Yorkshire as his father pursued a career in the shoe trade. This took Neil to Bridlington in his teens, where he failed all his exams and discovered that doing nothing soon turns into long-term unemployment. Re-inventing himself, Neil returned to education in his 20s, qualified as a solicitor when he was 30, and now spends his days in the courtroom and his evenings writing crime fiction

GOR004231658
9780007484508
000748450X
Last Rites by Neil White
Neil White
Used - Very Good
Paperback
HarperCollins Publishers
2012-07-26
528
N/A
Book picture is for illustrative purposes only, actual binding, cover or edition may vary.
This is a used book - there is no escaping the fact it has been read by someone else and it will show signs of wear and previous use. Overall we expect it to be in very good condition, but if you are not entirely satisfied please get in touch with us
Trustpilot