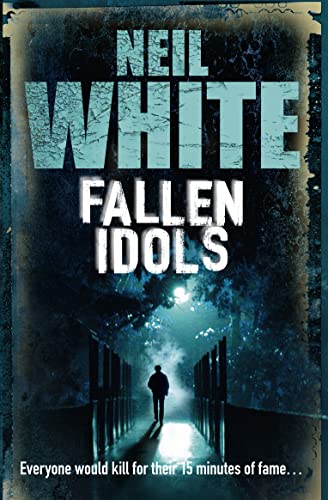 Everyone would kill for their fifteen minutes of fame...

A Premiership footballer is shot dead in cold blood on a busy London street, and a country is gripped by terror. Who is behind this apparently motiveless killing - and who's next in the firing line?

Everyone would kill for their fifteen minutes of fame...

A Premiership footballer is shot dead in cold blood on a busy London street, and a country is gripped by terror. Who is behind this apparently motiveless killing - and who's next in the firing line?

Jack Garrett is determined to find out. A small-time journalist who's left behind his Lancashire roots for the glitz and glamour - and seediness and squalor - of the capital, he's convinced this is no celebrity stalker.

Aided and abetted by DC Laura McGanity, desperately trying to juggle police life with motherhood and her feelings for Jack, the trail takes them back to Jack's home town of Turner's Fold - and his past.

What's the connection between the recent murder and the death of a young girl 10 years before?

Conspiracy, revenge and the high price of fame all combine in this stunning debut from a dazzling new voice in crime fiction.

`Fallen Idols has been hailed as a stunning debut'.

`Fallen Idols...has all the hallmarks of a great read for crime-thriller fans with celebrity killings, conspiracies, revenge and even a hint of romance'.

'... a whirlwind of a novel...a serious contender to match the giants of the crime fiction world'

Born above a shoe shop in the mid-1960s, Neil spent most of his childhood in Wakefield in West Yorkshire as his father pursued a career in the shoe trade. This took Neil to Bridlington in his teens, where he failed all his exams and discovered that doing nothing soon turns into long-term unemployment. Re-inventing himself, Neil returned to education in his 20s, qualified as a solicitor when he was 30, and now spends his days in the courtroom and his evenings writing crime fiction.

GOR004154236
9780007484485
0007484488
Fallen Idols by Neil White
Neil White
Used - Very Good
Paperback
HarperCollins Publishers
2012-07-26
528
N/A
Book picture is for illustrative purposes only, actual binding, cover or edition may vary.
This is a used book - there is no escaping the fact it has been read by someone else and it will show signs of wear and previous use. Overall we expect it to be in very good condition, but if you are not entirely satisfied please get in touch with us
Trustpilot