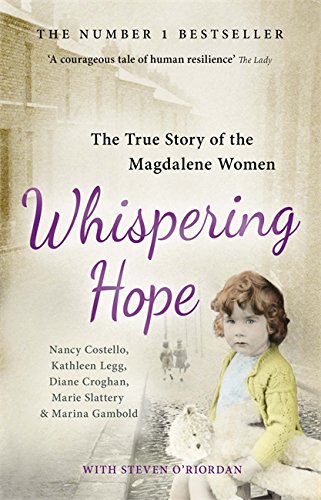 The harrowing account of five women who were confined in Magdalene Laundries in Ireland.

Whispering Hope: The True Story of the Magdalene Women by Nancy Costello

"At the conclusion of my discussions with one group of the Magdalene Women one of those present sang 'Whispering Hope'. A line from that song stays in my mind - 'when the dark midnight is over, watch for the breaking of day'.
Let me hope that this day and this debate heralds a new dawn for all those who feared that the dark midnight might never end."

On 19 February 2013 the Irish Taoiseach Enda Kenny apologized to the women who had been incarcerated in Ireland's Magdalene laundries. In the audience sat Steven O'Riordan, a documentary filmmaker and founder of the charity Magdalene Survivors Together. And by his side, waiting patiently for the words they'd been fighting to hear, were some of the women he had helped.

For Nancy, Kathleen, Diane, Marie and Marina were confined in Magdalene laundries throughout Ireland during the 1950s, 60s and 70s. The harrowing physical and psychological abuse they endured in the institutions, run on behalf of the State, led to a lifetime of shame and secrecy.

Now, in WHISPERING HOPE, these women tell their stories for the first time. Their fight for justice and forged friendships has enabled them to move forward and have their voices heard, their individual accounts weaving together in an immensely powerful narrative that shines a light on a dark chapter in Ireland's history.

Inspirational and moving, this is the story of five women brave enough to confront their past and strong enough to not let it define them.

Despite its distressing content, WHISPERING HOPE deserves to be recognized as an important book. It finally gives a voice to women who were once to ashamed or too traumatized to talk about their Magdalene experiences. * SUNDAY BUSINESS POST *
This harrowing but important book tells the stories of five women who were confined in Ireland's notorious Magdalene laundries... A courageous tale of human resilience. * THE LADY *
Nancy Costello, Kathleen Legg, Diane Croghan, Marie Slattery and Marina Gambold were confined in Magdalene Laundries in Ireland during the 1950s, 60s and 70s. Through the charity Magdalene Survivors Together, founded by documentary and filmmaker Steven O'Riordan, they fought for justice and in 2013 won compensation and an apology from the Irish State.
GOR007280929
9781409158295
1409158292
Whispering Hope: The True Story of the Magdalene Women by Nancy Costello
Nancy Costello
Used - Very Good
Paperback
Orion Publishing Co
2016-01-28
304
N/A
Book picture is for illustrative purposes only, actual binding, cover or edition may vary.
This is a used book - there is no escaping the fact it has been read by someone else and it will show signs of wear and previous use. Overall we expect it to be in very good condition, but if you are not entirely satisfied please get in touch with us
Trustpilot