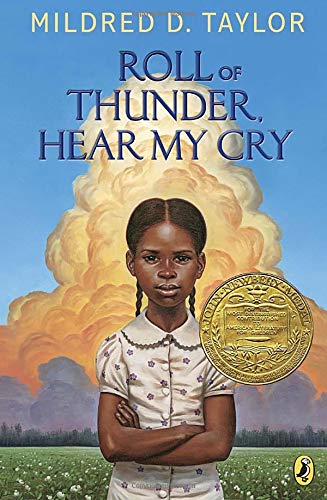 Roll of Thunder, Hear My Cry by Mildred D. Taylor

Roll of Thunder, Hear My Cry by Mildred D. Taylor

With the land to hold them together, nothing can tear the Logans apart.

Why is the land so important to Cassie's family? It takes the events of one turbulent year-the year of the night riders and the burnings, the year a white girl humiliates Cassie in public simply because she is black-to show Cassie that having a place of their own is the Logan family's lifeblood. It is the land that gives the Logans their courage and pride, for no matter how others may degrade them, the Logans possess soemthing no one can take away.


[Taylor] writes not with rancor or bitterness of indignities, but with pride, strength, and respect for humanity.-The New York Times Book Review

The vivid story of a black family whose warm ties to each other and their land give them strength to defy rural Southern racism during the Depression . . . Entirely through its own internal development, the novel shows the rich inner rewards of black pride, love, and independence despite the certainty of outer defeat.-Booklist, starred review

The vivid story of a black family whose warm ties to each other and their land give them strength to defy rural Southern racism during the Depression. . . . Entirely through its own internal development, the novel shows the rich inner rewards of black pride, love, and independence despite the certainty of outer defeat. -Booklist (starred review)

The strong, clear-headed Logan family . . . are drawn with quiet affection and their actions tempered with a keen sense of human fallibility.-Pointer, Kirkus Reviews

The events and setting of the powerful novel are presented with such verisimilitude and the characters are so carefully drawn that one might assume the book to be autobiographical, if the author were not so young.-The Horn Book

This recently published special 40th anniversary edition of the Newbery-Award winning coming-of-age story features gorgeous new cover art by Kadir Nelson . . . The theme of community resistance to racism is still relevant, and the 10-year-old narrator, Cassie, is an inspirational protagonist for boys and girls of all ages.-Ebony

Mildred D. Taylor is the author of nine novels including The Road to Memphis, Let the Circle Be Unbroken, The Land, The Well, and Roll of Thunder, Hear My Cry. Her books have won numerous awards, among them a Newbery Medal (for Roll of Thunder, Hear My Cry), four Coretta Scott King Awards, and a Boston Globe-Horn Book Award. Her book The Land was awarded the L.A. Times Book Prize and the PEN Award for Children's Literature. In 2003, Ms. Taylor was named the First Laureate of the NSK Neustadt Prize for Children's Literature. Ms. Taylor now devotes her time to her family, writing, and what she terms the family ranch in the foothills of the Rocky Mountains.


Kadir Nelson (www.kadirnelson.com) is a two-time Caldecott Honor Award recipient. He has received an NAACP Image Award, a CASEY Award, the 2009 and 2014 Coretta Scott King Author Award, and the 2009 Robert F. Sibert Informational Book Award. Among Mr. Nelson's other awards are gold and silver medals from the Society of Illustrators. His work has appeared in The New York Times, Sports Illustrated, and The New Yorker. He lives in Los Angeles.
GOR003093010
9780140384512
0140384510
Roll of Thunder, Hear My Cry by Mildred D. Taylor
Mildred D. Taylor
Used - Very Good
Paperback
Pearson Education Limited
20011127
304
Winner of Newbery Medal Winner.
Book picture is for illustrative purposes only, actual binding, cover or edition may vary.
This is a used book - there is no escaping the fact it has been read by someone else and it will show signs of wear and previous use. Overall we expect it to be in very good condition, but if you are not entirely satisfied please get in touch with us
Trustpilot