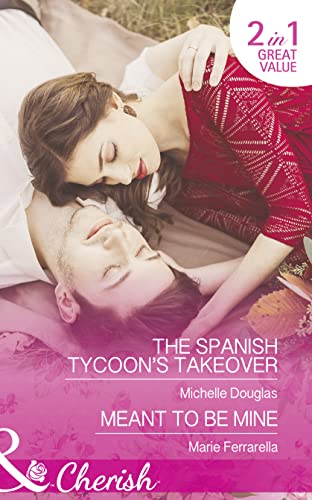 Her family hotel has just been taken over and Wynne needs to do whatever it takes to seem bright, breezy and unflappable. Easier said than done! If she can work nicely with the charismatic and ruthless Xavier Ramos then her colleagues might just keep their jobs...

Xavier has no qualms about ruthlessly transforming a homely motel into a chic boutique hotel - only he has a fight on his hands against fiery Wynne! While he's busy taking over her hotel, with every battle he finds she's taking another piece of his heart...

Meant to Be Mine
by Marie Ferrarella

He's a "gift" - a referral from the Matchmaking Mamas - sent by Tiffany Lee's mother to do her bathroom remodel. But the real surprise is that Tiffany already knows Eddie Montoya. When they were little, he was her playground protector. When they were in college, Eddie was her campus competition. And now she's a teacher and he's her handyman?

Well, just on weekends. On Monday morning, Eddie shows up at Tiffany's school-as the new third grade teacher. When a fundraising contest between classes is announced, the old rivalry heats up. And it's game on! Except as the playful competition intensifies, so do their feelings for each other. And Eddie begins to wonder if they might work better...as a team.

When MICHELLE DOUGLAS was asked what she wanted to be when she grew up she answered, "A writer." Years later she read an article about romance writing and thought, ooh that'll be fun. She was right. She lives in a leafy suburb of Newcastle on Australia's east coast with her own romantic hero who is the inspiration behind all her happy endings. Visit Michelle at her website www.michelle-douglas.com This USA TODAY bestselling and RITA (R) Award-winning author has written more than two hundred books for Harlequin Books and Silhouette Books, some under the name Marie Nicole. Her romances are beloved by fans worldwide. Visit her website at www.marieferrarella.com.
GOR008212813
9780263922882
026392288X
The Spanish Tycoon's Takeover: The Spanish Tycoon's Takeover / Meant to Be Mine (Matchmaking Mamas, Book 22) by Michelle Douglas
Michelle Douglas
Used - Very Good
Paperback
HarperCollins Publishers
2017-03-09
416
N/A
Book picture is for illustrative purposes only, actual binding, cover or edition may vary.
This is a used book - there is no escaping the fact it has been read by someone else and it will show signs of wear and previous use. Overall we expect it to be in very good condition, but if you are not entirely satisfied please get in touch with us
Trustpilot