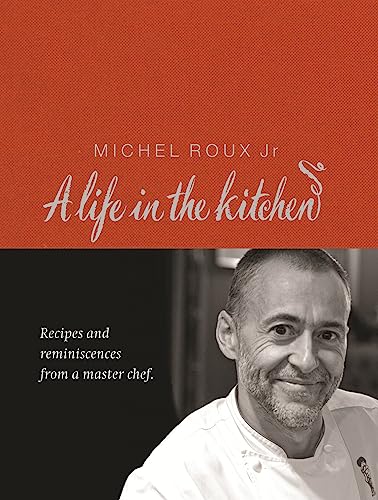 Michel Roux: A Life In The Kitchen by Michel Roux Jr.

The life - and life behind the scenes - of one of Britain's best-known chefs.

Michel Roux: A Life In The Kitchen by Michel Roux Jr.

The life - and life behind the scenes - of one of Britain's best-known chefs.

The Roux family is the most influential family associated with food in Britain. Through their various restaurants (Le Gavroche, Waterside Inn, Brasserie Roux) and catering services they have trained many of Britain's top chefs.

Albert and Michel Sr brought French high cuisine to Britain in the sixties, much of the produce being brought twice weekly from France by Michel's mother in the family car. Michel grew up in an environment of respect for fine food and ingredients, of never settling for second best, and of traditional French family excursions to find wild food. He tells the story of what it was like to grow up as part of this close-knit family.

He left school at 16 to start his first apprenticeship with Maitre Patissier Hellegourarche in Paris. He then worked with Alain Chapel at Mionnay before doing his mililtary service at the Elysee Palace cooking for Presidents Giscard d'Estaing and Francois Mitterand. After a stint cooking at the Mandarin Hotel in Hong Kong and catering in London, he took over the running of Le Gavroche in 1994.

Roux's magnanimity - along with his passion for food and serious work ethic - shine through... the recipes in it are accessible, uncomplicated and wonderfully tempting * METRO *
Michel Roux Jr is one of Britain's finest chefs... it's fascinating stuff for anyone interested in classic French cookery... Fabulous. * FRESH *
elegant French recipes, such as duck confit, lobster with garlic butter and pink praline tart, that should appeal to any cook. * SQUARE MEAL *
Michel Roux Jnr's autobiography-cum-cookbook is half food memoir, half French recipe collection and wholly engrossing. Roux's anecdotes provide a fascinating window on a life spent pioneering French haute cuisine as a member of the UK's defining culinarly dynasty. * CATERER & HOTELKEEPER *

Michel Roux Jr is one of London's most respected chefs. Le Gavroche, which he has run since 1991, continues to receive recommendations for excellence in every food guide. Michel's early training in France instilled in him a belief in simplicity and quality of raw ingredients which has he put to use in developing the recipes he uses both at Le Gavroche and in his books: Le Gavroche Cookbook, Marathon Chef and Matching Food and Wine.

GOR002140743
9780297844822
0297844822
Michel Roux: A Life In The Kitchen by Michel Roux Jr.
Michel Roux Jr.
Used - Very Good
Hardback
Orion Publishing Co
2009-01-29
320
N/A
Book picture is for illustrative purposes only, actual binding, cover or edition may vary.
This is a used book - there is no escaping the fact it has been read by someone else and it will show signs of wear and previous use. Overall we expect it to be in very good condition, but if you are not entirely satisfied please get in touch with us
Trustpilot