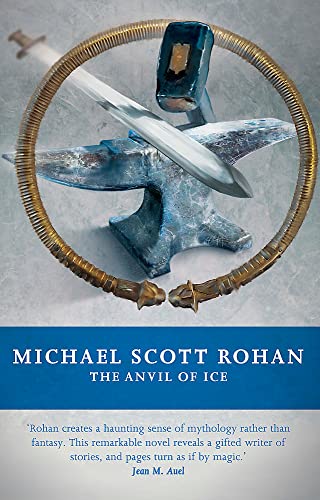 The Anvil of Ice by Michael Scott Rohan

The first volume of Michael Scott Rohan's acclaimed The Winter of the World sequence.

The Anvil of Ice by Michael Scott Rohan

The chronicles of The Winter of the World echo down the ages in half-remembered myth and song - tales of mysterious powers of the Mastersmiths, of the forging of great weapons, of the subterranean kingdoms of the duergar, of Gods who walked abroad, and of the Powers that struggled endlessly for dominion.

In the Northlands, beleaguered by the ever-encroaching Ice and the marauding Ekwesh, a young cowherd, saved from the raiders by the mysterious Mastersmith, discovers in himself an uncanny power to shape metal - but it is a power that may easily be turned to evil ends, and on a dreadful night he flees his new home, and embarks on the quest to find both his own destiny, and a weapon that will let him stand against the Power of the Ice.

His wanderings will bring him great friends but earn him greater enemies, and eventually they will transform him from lowly cowherd to a mastersmith fit to stand with the greatest of all men.

A wonderful story. Michael Scott Rohan has conceived an interesting and original fantasy concept. It is sure to gather a strong following.Rohan creates a haunting sense of mythology rather than fantasy. This remarkable novel reveals a gifted writer of stories, and pages turn as if by magic.A skilfully told tale, blending myth and prehistory into a carefully wrought world where the conflict of Ice Age forces is focussed in the person of an enigmatic smith. It begins a trilogy which will be worth following.I consider The Anvil of Ice to be an outstanding piece of fantasy fiction, leaving one eager to welcome the second book in the series.Scott Rohan has an extraordinary gift for making every scene come to life with vivid realityA very good and a very powerful writer . . . The concept of the Ice itself as the ultimate enemy is a remarkable feat . . . strong and intricate characterizations . . . compelling reading.A good read . . . Much fascinating research is evident here . . . a grittily solid background of impending Ice Age. The characters are nicely done, and the final confrontation between Elof and the representative of the Ice powers has a nifty magical twist . . . Rohan clears the major hurdle of a trilogy opening; he actually makes me want to read book two! Stay tuned. - White DwarfRohan has picked up where Tolkien left off and then some. He has a sure touch with the mythology of Northern Europe, handles the high style beautifully, and in the smithcraft of his protagonist finds a fresh metaphor for magic. - The New York Review of Science Fiction

Michael Scott Rohan (1951 - 2018)
Michael Scott Rohan was born in Edinburgh, in 1951, of a French father and Scottish mother, and was educated at the Edinburgh Academy and St.Edmund Hall, Oxford. He is the author of twelve fantasy and science-fiction novels, including the award-winning Winter of the World trilogy, and co-author of two more, as well as short stories and several non-fiction books. His books have appeared throughout Europe, the USA and the rest of the world, and have been republished as eBooks by SF Gateway. Besides writing novels he has been a Times columnist, edited reference books, and reviews and writes about classical music for all the major British music magazines, currently BBC Music Magazine and Opera. He enjoys singing, arguing, beer, Oriental food, travelling, playing with longbows and computers, and hobbies including archaeology and palaeontology. After 2000, diagnosed with incurable illness, he abandoned fiction writing. However, he has managed to continue travelling, throughout Scandinavia, North and South America, and both Antarctica and the Arctic, and he is finishing another fantasy novel. He passed away in 2018.

GOR012805612
9780575092211
0575092211
The Anvil of Ice by Michael Scott Rohan
Michael Scott Rohan
Fantasy Masterworks
Used - Well Read
Paperback
Orion Publishing Co
20150910
368
N/A
Book picture is for illustrative purposes only, actual binding, cover or edition may vary.
This is a used book. We do our best to provide good quality books for you to read, but there is no escaping the fact that it has been owned and read by someone else previously. Therefore it will show signs of wear and may be an ex library book
Trustpilot